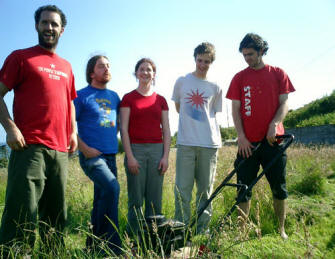 Review Snapshot:
College rock heroes from Cork up the ante and stake a claim for the title of happiest band in the world. Just don't mention the word 'quirky'. And on the very day we learn that our friends in the USA decided to impose on us another four years of chasing around the Bush in search of world peace, it's hard to think of a better remedy to give our happy buzz a much needed boost.

Full review: Here's one for the Cluas 'top five' writers to ponder: If there was a festival of purely 'happy', good vibe rock bands, who would get on the bill? We're talking about the likes of Flaming Lips, the Polyphonic Spree, Presidents of the United States etc. Sure, they say the devil has all the best tunes, and rock'n'roll is about a certain decadency and darker side of life, but cheesy chart pop aside, I wonder sometimes if it's actually more difficult to write a song with a clearly positive uplifting message than it is to pen an angsty introspective.

The reason I bring this up is because if the sole factor in a band's success was the feel-good factor and their ability to put a smile on your face then the fantabulous Fred probably deserve to be bigger than The Frames. I have to admit to a slight bias here given the fact that Fred practically held a residency in both the UCC Old Bar and the late, lamented, legendary Sir Henry's during my formative years. They provided the soundtrack to some my best drinking sessions and thus a sense of nostalgia is inevitable whenever I hear them.

First up however is the affecting and funny Ian Whitty, a dead ringer for Josh Ritter in more than looks, followed by another very familiar face on the Cork scene, singer-songwriter Niall Connolly along with his Token Mellow Band. Connolly is a charming, warm-hearted songwriter with a strong voice that incorporates trad elements and pop melodies, but with an alternative slant that sees him, for example, prelude one of his songs with a cover of Pavement's 'Here'.

And so onto Fred. To be honest I always thought these guys would remain the quintessential college band, good for a laugh but nothing else. But in the plush surroundings of Crawdaddy it quickly becomes clear just how much they have evolved. Their progression to a mean, shamelessly entertaining machine has been done without the loss of any of their infectious personality but with the addition of some rollicking new choons. And on the day when our friends in the USA decided to impose on us another four years of chasing around the Bush in search of world peace, it's hard to think of a better remedy to give our happy buzz a much needed boost.

Fred look and sound like a proper band, exuding a genuine matey-ness and sheer love of what they do that is simply infectious. No cynical pouting or posing here, just an invitation to grin, get down and boogie.

These guys play kooky classics, although their genius is often mistaken for mere quirkiness, a description that seems to afflict Cork bands like the plague (although having said that I guess they do sing songs about vegetables, magic numbers, and irrational fear of the changing seasons).

Hooks, people, hooks - that's what it's all about. And you are guaranteed to walk away from a Fred gig with at least three new humming soundtracks imprinted on your brain. Multi-instrumentalist Evelyn on flute and keyboards is a key suspect in this. Lead guitarist Jamie looks too meek to have a funky rock demon implanted inside of him, while frontman Joe could indeed be a younger, hairier and slightly less dapper Wayne Coyne.

Their pending second album also looks like being a fairly big leap in terms of ambitious song-writing, amply demonstrated by recent single 'Summer's Coming', which comes replete with samba breakdown. These are songs that invite you to "take a break from growing old for a while", while it's hard to think of any other band that would make a song entitled 'October' sound so sunny.

Towards the end of the gig their college band roots spring up a little, when they toss out a piss-taking, crowd pleasing cover in the shape of the 'Ghostbusters' theme tune (it used to be 'Ice Ice Baby'), but there really is no need anymore. These days their own songs are more than crowd pleasing enough. Pound for pound the happiest band in the world.

Check out the CLUAS review of Fred's debut album.