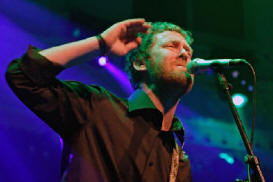 Review Snapshot:
A typical Frames crescendo of quality over the space of two hours, beginning quietly before melting into the familiarity of their more established tunes as well as some fiery renditions of their newer songs. The gig was coloured by the pelt and blizzard of snow which all fans endured travelling there, making the intimacy and warmth so characteristic of all Frames performances more highly accentuated and more deeply appreciated. After a slightly indifferent beginning, a mutual warming-to between band and audience puts this Frames gig right up there with the best of them.

Full review: For such a big band, the Frames still do all the little things so well. The storytelling, onstage musical playacting and Glen Hansard's orchestral conducting of his audience as backing vocalists. By now these are all well-established trademarks of the Frames experience but which nonetheless, coupled with the small matter of their songs, never fail to generate the buzzing warmth and intimacy that makes their live performances so impressive. On a night with several inches of snow outside, the hushed warmth of Loppen was very much the harbour in the tempest. However, to use an expression both trite and true, the real storm was gathering onstage.

The start of the set, however, was all thunder and no lightning. Opening with 'Keepsake', 'A Caution to the Birds' and 'Dream Awake', the Frames struck a sombre, melodramatic and excessively earnest tone to begin with which, without any characteristic Hansard preamble to inject life and meaning into a clutch of largely still unfamiliar tunes from 'Burn the Maps', did little to break the ice. Indeed, even during the simmering adrenaline and purpose of the fantastic 'Finally', Glen Hansard - now replete with Van Gogh-like red beard - appeared more concerned with completing the 'tormented genius' image by glaring furiously at a spot on the back wall than directing his music at a bypassed audience who swayed uncertainly and appeared to consider retaking their seats until something more familiar and friendly surfaced.

Ultimately however, timing is one of the Frames' strongest suits and Glen chose just the right moment, Hamlet-like, to cast his knighted colour off and let his eye look like a friend on Denmark. Discarding his beanie hat along with the dark pretensions, he launched into the lullaby anthem 'Lay Me Down' which had the assembled crowd of Danes and Irish sighing, smiling and singing along in recognition and relief. This was followed by the beautifully contemplative 'What Happens When the Heart Just Stops' ad-libbed into Van Morrison's 'Caravan' - but not before the now characteristic prologue; a recollection of coming home hung-over after a night spent sleeping in a girlfriend's front garden. The bittersweet bareness of 'Happy' and 'Sideways Down' followed (the latter prefaced by a hilarious Hansard appraisal of Sex and the City's Carrie and her choice in men which, with its lead line 'You're standing alone', seemed to make all the sense in the world at the time).

At this point the Frames were positively incandescent, radiating energy through warm humour and the heated genius of their music. Scorching renditions of 'Pavement Tune' and 'Fake' nearly took the roof off, with Johnny Cash's 'Ring of Fire' rather aptly worked into the mix. The taper removed, Glen Hansard was now burning at his brightest. The performance was then given a preliminary warming down with 'Your Face' and 'Star Star' (once more combined to heartbreaking perfection with the tragic beauty of dEUS's 'Hotellounge').

In what is now an established formality, The Frames then trooped offstage before returning minutes later to chants of 'one more tune', to which they over-obliged with customary generosity. In special tribute to all the Irish fans who had turned out, the incendiary 'Revelate' was first sent up, all guns blazing, the jagged opening chords erupting molten from Hansard's Fender.

Coming down from this with slow burners 'Friends and Foe', the quirky, thumb-clicking 'Devil Town' and the peerless 'Dance the Devil', the Frames chose neither to burn out nor fade away. For the audience it was a case of going instead "out of the darkness and into the cold", sustained by a warmth generated from a powerful and passionate performance by some of the best in the business.