Review of their gig in Vicar Street, Dublin, 20 September 2004 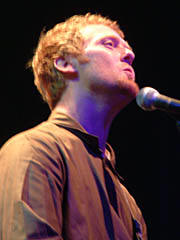 Review Snapshot:
The Frames are clearly intoxicated with their new album and put this ahead of entertaining a full house of expectant fans.

Full review: Only recently, a trawl through some dusty old vinyl threw up 'Another Love Song' by The Frames. On the one hand, I couldn't quite believe it was released as far back as 1991 but on the other, this band seems woven into the very fabric of the Irish music scene since the dawn of time. Without question, I have seen Glen and friends live more than any other band and it is gigging where they excel. Their albums, much as I want to like them, are patchy, and despite the ministrations of such luminaries asSteve Albini have never quite delivered on their live promise. This is a great shame as gigging has a fairly local reach which explains their relative lack of popularity outside Ireland.

That said, my faith in their live abilities was somewhat eroded at a Glen Hansard solo gig in Whelan's last year where each song included a 4 minute directionless, pointless pre-amble (think the dog story on 'What Happens When The Heart Just Stops' from 'Set List' only more inane and irrelevant). Equally odious was support actMark Geary doing exactly the same thing and telling the (mainly young) crowd that things were so hard before the Celtic Tiger that we used to look forward to Mikado Biscuits at Christmas. Things were tough alright, but hardly the Dickensian vista he is peddling.

However, on the strength of their recent live 'Set List' album, I part with 30 euro to catch them in Vicar Street. The atmosphere has built nicely by the time Glen takes to the stage opening with 'Happy' and 'Finally' from the new album, 'Burn The Maps'. By the third and fourth song, the crowd's attention is starting to wane. It is clear that they are going to play the new album (only released the previous Friday, this is Monday) in its entirety, in track order. It's a decision I find hugely perplexing; I certainly don't expect them to revisit 'Set List' but throw us a God damn bone here, Glen, even the odd song the crowd recognises and can get excited about! What we do get sounds dirge-like and monotonous delivered to a static but attentive crowd. The fact that it hasn't descended into a chatter-fest is a testament to how good they can be. The only song that lifts proceedings is previous single 'Fake'. To my mind, it is a lazy 'Revelate' clone but the crowd embrace familiarity with vigour. After that, it is more of the same, with only 'Keepsake' and 'Suffer in Silence' rising above what sounds an unremarkable and bland collection of songs.

For an encore, Glen blasts through four old favourites including 'Revelate' and 'Lay me Down' but the damage is done, a storming encore does not a gig make. The whole episode has been rather torturous. Inflicting an album of new material on a crowd who have paid good money to see you is obtuse and borderline arrogant. It might fly in a support slot or at a festival but here it really does smack of biting the hand that feeds.