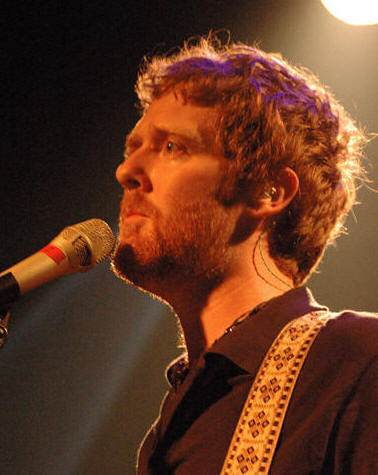 Review Snapshot:
The Frames spilt opinion, they have people at extremes of both sides of the fence, but they're always disputed and they're always there and their live performances are always agreed upon as being something really worth witnessing. And as I found out recently, that's no word of a lie.

Full review: I've been in Ireland just over a week and I've seen The Frames twice already. My first ever Frames gig was on Tuesday 19th September at the Doyles' Ruby Sessions and the second was the instore at HMV on Grafton Street on Friday the 22nd, and I must admit I was introduced to something good. A convert if you like to Ireland's secret superstars.

What you notice about The Frames over here is that they split people right down the middle, but no one I spoke to at the gigs and thereafter, the Joe Public in the streets, in the pubs and at the Cluas benefit gig could say they weren't good live. And it's very true that they are a formidable live act.

Playing in support of their new album 'The Cost', the Doyles show was a very intimate acoustic performance with people all crammed into a little room upstairs and almost no need for microphones or amplification, and the HMV gig was an electric rendering with the crowd interspersed amongst shelves of films and DVD boxsets. At both they played straight through the album's running-order and then took a few requests.

Doyles was one of the most fantastic things y'ever seen, not knowing these songs they seemed instantly recognisable, you knew the words when you came out of the pub; I haven't been so impressed by a band I was previously unfamiliar with since seeing Stereolab, and I subsequently bought up their back catalogue and they became one of my all-time favourite groops.

The gig was beautifully quiet and close, Glen's voice was on form, Colm's fiddling was fantastic, the subtle percussion was calmly driving the whole thing along and the songs were simply superbly pulled off. 'Song For Someone' started the whole caboodle off and it was gorgeous, a strained vocal leading into the chorus that sets your ears alight.

'When Your Mind's Made Up' was absolutely special and 'Sad Songs' and 'True' were straight-off classics, but it was 'People Get Ready' that really stole the show. Causing goose-bumps to prick up on the back of your neck when that chorus comes in, that chorus, the chorus to win a thousand hearts: 'We have all the time in the world to get it right/We have all the love in the world to set allight.'

It was a lovely show ending in a few rare snippets, including 'Boobies'? And then it was to HMV, a little different, a little weird for the band who didn't like the bright glaring lights and the tape that separated the audience from the group, which was soon removed by Glen. They played through the songs again, 'Rise' sounding much more prominent this time with an electric and electrifying twist, 'The Side You Never Get To See' too was fabulous after its confused introduction, resulting in Glen figuring he "used to be charming", but now is just "mental".

No, he certainly hasn't lost it yet. From buying that semi-acoustic guitar in 1992, to now when it's a near worn-out contraption of wood and metal that's been a vehicle for so many great songs over the years, well, it's got life left in it still! They end the gig with 'Precarious Aiming', which is great way to go and they're done. The crowd of adoring fans hang around for the signing afterwards, some for an hour or more. The truly devoted still have as much to believe in as ever. Here's to The Frames latest incarnation.