A review of their concert in Dolan's, Limerick on 28 October 2006 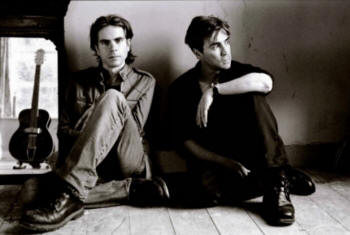 Review Snapshot:
The 4 of Us? Northern pretty boys with the dumbest name in pop and responsible for one of the worst songs ever written? Well, yes, but the most underrated band in Ireland too.

Full review:
You type www.cluas.com in to your browser, you go to the gigs page. You see the link that says "The 4 of Us (Limerick)". You allow your mouse to hover over it for several indecisive seconds, watching arrows change to hands then back again. You eventually decide to surf elsewhere, maybe to find out what those midgets are up to. I can kind of understand why.

The 4 of Us have an image problem. First of all, there's the name. It is the worst name in the history of names. It's the Mr. and Mrs Russell deciding that Jack is the only name for their kid of band names. Putting aside for a moment the fact that it is very often guilty of offences against the mathematical sciences, (On stage, they number anything between two and five) here is what happens when you ring up to make a booking for one of their shows.

TPCCE: "If there are four of you, you'll need a ticket each"

Quite apart from all of that there is the issue of Brendan Murphy, the singer, who, even from my rampantly heterosexual perspective, I can clearly see is a beautiful man. No problem, I am happy to embrace my female side. The problem is that the female at my side would be only too happy to embrace him. She is not alone in this. Tonight's audience, of whom women of a certain age make up a sizeable proportion, gaze in lustful appreciation at the (sorry about this girls) newly married singer. It's somehow telling that the only heckle of the night is an appreciative "What's your beauty secret?" courtesy of a girl with the strongest Northern accent you've ever heard.

Then there's "Mary" which, despite being their biggest hit and undoubtedly their most popular number, is very possibly one of the worst three songs of all time, up there with Timmy Mallett and that one about writing classics in attics. It is little more than a nursery rhyme, written when the band were barely out of nappies, and it shows.

But it would be wrong to dismiss The 4 of Us as mere high image low content pretty boys and if your only memories of them date from thoseheady eighties days when, with their billowing white shirts and perfect hair, it looked as if the Brothers Murphy were going to become (How does that phrase go again? - Oh yeah) the nextU2, then you are in for a shock. Older and wiser, the band have matured into excellent, intelligent and thoughtful songwriters and have, in recent years and with a minimum of fuss or fanfare, quietly gone about the business of putting together a body of songs which, in terms of pure quality, are the equal of anything that's coming out of your radio these days.

New album, the marvelous "Fingerprints" and its predecessor, the equally impressive "Heaven and Earth" make up most of the set and we are treated to a succession of quiet, tuneful gems.

"Gospel Choir" and "Voice on the Radio" are hushed and gorgeous, Brendan's voice just loud enough to be heard over a backdrop of purely plucked twin acoustics. "U Make Me Feel", skips though sunkissed meadows of waist high grass, mentioning Al Green on the way and evoking the spirit of love filled summers better than any song I know while their finest moment, "Blue" is a stark piano led ballad of searing emotional intensity which would not sound out of place ona Blue Nile record. Praise does not get any higher. Of the older stuff, "She Hits Me" has lost none of its ability to get asses shaking and hips wiggling but it's "Mary", predictably, that gets the night's biggest response. A group of Munster fans, fresh from Thomond, charge the stage and kick imaginary conversions, can can style, but like the greatest supporters in the world that they are, leave immediately afterwards.

When you consider that drummer Peter McKinney uses brushes for most of the evening and that acoustic guitars feature much more prominently than their electric counterparts you'll realise that those high energy, heavy on the wah wah pedal days are but a memory which, in the words of that popular school bus song, we hope to god will never come back. Whether The 4 of Us will ever recapture the imagination of the Irish public is debatable, but if ours was a world where talent was always rewarded this band would be meeting world leaders, turning on the Christmas lights and earning millions through merchandise sales. My missus would buy the pillowcase, that's for sure.