Described on the posters as 'enigmatic local ska heroes playing last show', this was a farewell gig that promised to be something extraordinary. After five years together, it was going to be the final goodbye to the Fluid Druids. A band that is 'far too good' according to Shane McGowan and Jerry Fish describes them as 'a rocking band with rocking tracks'. 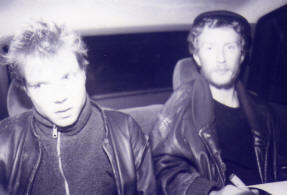 A strange tint of magnolia lit the bar area of the new Crawdaddy venue. The barman was busy stocking the fridge as the early crowd occupied the leather sofas. The atmosphere was laidback, maybe a little too laidback. Something needed to happen to change the atmosphere.

That something was the Little Kicks. The support band who lived up to their name and shook the venue to life. Their funky 'Move Too Fast' had the crowd swaying, the upbeat melody of 'Little Town' had the crowd smiling and the catchy 'Up North' had the crowd singing. With every song the crowd seemed to take a step further toward the stage. A buzzing energetic atmosphere was now zipping through the small venue.

It wasn't long before the Fluid Druids finally appeared on stage. Lead singer Oisin Leech thanked the crowd for coming along to say farewell to the Fluid Druids but hello to the 747s. And with that brief introduction of the band's new name, they burst into 'Elaine', a song about a tomboy like girlfriend who left guitarist Ned to join the U.S. Army. A rush of adrenaline seemed to leave the stage and affect the now active crowd. A rebellious Clash-esque 'Leave Your Job Today' further added to the excitement before 'Night & Day' and 'Devil's Tears' unleashed the funky punk element to their sound.

While band members are individually very talented, it is the chemistry between them that makes the 747s a force to be reckoned with. The vocals and guitar playing of both Oisin and Ned are superb, the drumming by Massimo is outstanding and the guitar playing by Freddie is jaw-droppingly excellent. As a band they click so easily and the result is well-timed and perfectly delivered songs. There are shades ofThe Doors, The Kinks, The Jam and The Wailers all noticeable in their sound but still they manage to retain their individualism with each song.

The evening was winding on and the barman was restocking the fridge. But the crowd had not had enough of their lively music. 'The Price Of Bread', a mini story wrapped up with the exterior of finely-tuned soft punk was offered up. It soon imploded with some guitar playing that teased the hair on the back of neck of anyone in the venue. 'Spanish Quarter Girls' had hips moving with the rhythm, almost as if it was disco music.

Remember the name of this band. And bes ure not to miss any of their live shows.