You can't help but like Wayne Coyne - the suave and somewhat eccentric frontman of the American alternative rock band The Flaming Lips. As well as having produced some of the finest music in recent times in the shape of the albums 'The Soft Bulletin' and 'Yoshimi Battles the Pink Robots', Coyne has led an ever-changing line-up through the highs and lows of almost 20 years to finally, and quiet rightfully, see his band emerge as a major act. 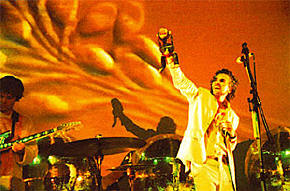 Wielding a strobe light over his head, Coyne bounds on stage to Carl Orff's 'Carmina Burana' amid a chaotic scene that involves huge balloons being hurled off the stage, glitter and lots of dancing animals. On the big screen behind them, a huge message reads something along the lines of 'Tonight! The Flaming Lips Will Change You're Life Forever!' During the course of all this, the band somehow find time to launch into the excellent 'Race for the Prize'. Not surprisingly, the crowd love it.

Next, in what perhaps is a nod to the band's friendship with Jack White, the Lips take on the White Stripes 'Seven Nation Army' with Coyne ranting out his own version of lyrics into a megaphone, while rollicking around the stage like a teenager who's just discovered the joys of rock music.

It's hard to avert your eyes from him for a second; his presence on stage is so domineering if not slightly ecclesiastical. Dressed in a white suit, and with a tendency to often sermonise and philosophise between songs, Coyne regularly comes across as an evangelist rather than the lead singer of a rock band. Furthermore, his obsession with smearing fake blood over his face several times during the show, as well getting a nun glove puppet to encourage some audience participation on the song 'Yoshimi Battles the Pink Robots Pt.1', cements this priestly image.

With their songs about humankind, evil pink robots, love, death and optimism, The Flaming Lips music is like story telling with a quest to redefine the lines between rock and pop. Live, the band are still able to capture this experimentalism, cruising through renditions of 'Flight Test' and 'Do You Realize?' with a blend of warm, fuzzy electronica, live drums, and acoustic guitar.

Wayne drags out the megaphone again for 'Lightening Strikes the Postman' and aptly dedicates it to the striking postal workers as well as performing 'The Golden Path' from their recent collaboration with the Chemical Brothers. "I sung on it, so f*ck it, I'm performing it!" he cries, referring to the fact that the song is actually credited to the London dance duo.

The band bows out with the track 'A Spoonful weighs a Ton', which is accompanied by footage of the Teletubbies bouncing around in their usual surreal and blissed-out surroundings. Ironically, I went home in the knowledge that I had finally witnessed something more bizarre than an episode of this popular kiddies programme - A Flaming Lips concert!

Check out the CLUAS review of The Flaming Lips live in Dublin inJuly 2002.