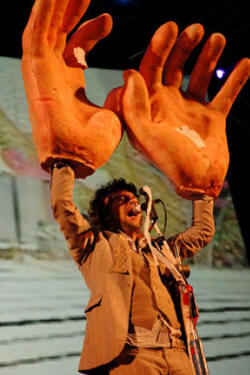 Review Snapshot:
Even a nasty sinus attack can't stop the all-powerful Lips from delivering their charming circus to Vicar Street tonight. Taking the business of crowd-pleasing to new heights, Coyne and co. bring us dancing girls, bouncy balloons laser beams. Oh, and some rather good tunes....

Full review: Glen Hansard looks frazzled. Hundreds of red beams are vying for position on his forehead as a cluster of folk below spot the Frames front man on the balcony. An affectionate mummer of: 'There's that bollocks Hansard!' ripples through the crowd. Across the way, portly Offalyite Mundy is blinking furiously too. But that's because many of the punters, with the best will in the world, would like to blind him. Yes, the good people at Warner saw fit to hand out laser lights and we fully intend to have fun, despite Wayne Coyne's earnest caveat that how we shouldn't use them to frighten people. Bless.

La Circue du Lips have rolled into town again, complete with customary superhero costumes, hyperactive santas and oversize balloons. And a light show that gives Jean Michelle Jarre a good ramble for his cash. For the uninitiated, the spectacle onstage of Coyne and his merry band of men is like dropping into Charlie's Chocolate Factory with a bellyful of magic mushrooms. Favourites 'Yoshimi' and 'Race For The Prize' and 'The Yeah Yeah Yeah Song' have the crowd bouncing like they've mainlined a load of Smarties.

Tonight, however, all doesn't go according to plan. Whatever lackeys in charge of pushing the dry-ice button has got carried away and Steven Drozd's sinuses start acting up, causing him to feel woozy and stagger off the stage, mid-set. Coyne, a man of unwavering sincerity, promises that the Lips will be back, that they will not disappoint. And to their infinite credit, they do come back and the guitarist is rewarded for the rest of the night with a football chant of 'Steev-o' which genuinely bewilders the band. 'I don't get it you guys, is that Irish?'

Three encores later and they finish with 'I'm Dreaming of a White Christmas' which would seem fitting for this band even if it weren't late November....