Review of her gig in The Village, Dublin, 4 February 2005

"HERE'S ANOTHER SONG ABOUT CHICKENS" 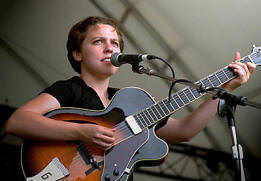 Review Snapshot:
Jules Jackson endures Erin McKeown at The Village and finds that both she and her support act are for the birds but, sadly, that he hasn't brought his skeet shooter.

Full review:
For years, I couldn't quite understand the significance of the scene in 'The Blues Brothers' where Jake and Elwood Blues play a gig on a barroom stage which is sealed off with chicken wire. I just couldn't grasp why people would ever want to throw beer bottles at a group of working musicians. After enduring Erin McKeown at The Village last Friday however, I not only understand the impulse to bottle an act, I have to admit that I nearly succumbed to it myself

Erin McKeown is the alcopop of Americana, sickly sweet and guaranteed to make you throw up yet her bloodless, soulless, passionless brand of musak has been championed by such high priests of Irish popular taste as Ray D'Arcy. You know him. He used to work on kids television with a couple of sock puppets but things took a turn for the worse and now he fronts 'You're A Star'. He is also responsible for making McKeown's ditty 'Born to Hum' a radio hit on Today FM. That's the atonal wail where she admits that she has, "nothing to say".

Things started badly when McKeown's support act, Kris Delmhorst, appeared on stage wearing what I shall call 'little girl hair'. 'Little girl hair' is when a grown woman adopts the hairstyle of a seven year old. 'Little girl hair' is usually accompanied by a cutesy little voice and a preference for all things whimsical. The High Priestess of 'little girl hair' is the fictional Phoebe from 'Friends' whose unique brand of musical self expression cast a long shadow over the night's proceedings. I knew I was in trouble when Delmhorst introduced one song as being, "about chickens". Not chickens as a metaphor for something like dirty sex on the mud floor of a shack in Louisiana but chickens as in those dead, plucked things you bring home and roast in the oven. Near the end of her set Phoebe, sorry, Kris welcomed a gurning midget with a lime green guitar onto the stage to duet with her on something that sounded akin to two cats being put in a washing machine on a slow cycle. As the audience started to clap and whistle at the entrance of the midget I realised with slow dawning horror that this wasn't some sidekick musician, it was the star of the show herself.

McKeown's press release, which is a masterpiece of egotistical self delusion, compares herself to such giants as Django Reinhardt and Bob Dylan, claiming that she, "brandishes one of the of the most distinctive guitar styles around, with a voice to match". That is certainly true. I have never heard a guitar made to sound like a baking tray dropped repeatedly on a stone floor before. As for the voice, it takes a certain kind of talent to sing off key consistently. Even the Muppets on 'You're a Star' manage to hit the odd right note occasionally. It's true that McKeown is technically able to play the guitar but to compare her with Django Reinhardt is a bit like comparing a bus driver to Michael Schumacher simply because they both have valid driving licenses. After enduring a series of workaday chord progressions which were masquerading as songs, I began to feel a dull throbbing in my temples which rapidly turned into a full blown migraine. Meanwhile, on stage, McKeown was twittering on about how she went to Brown University to study Ornithology but quickly decided that she wasn't cut out to understand anything as simple or melodic as birdsong and instead decided to change tack and begin a series of experiments into sonic torture techniques or, as she called it, song writing.

After that, she introduced an emotionless dirge which attempted to forge a connection between the concept of love and the adaptation of birds in flight. It was at this point I realised what it was that I hated most about McKeown. Essentially, she is a 'Beaker' who is only doing this for the attention. If she could get as much applause from reading out a learned thesis on the migratory habits of the gannet she would chuck the guitar and any pretence of musicality out the window and return to her laboratory in Rhode Island before you could say, "Here's another song about chickens".

More squawking ensued, after which La Belle Dame Sans Musique decided it was time for a self aggrandising Q&A with the audience. I considered asking whether she had any Paracetamol on her, but thought better of it because I knew that if I did, the bottle of warm beer I was clenching in my fist would soon be sailing through the air towards the stage. A few polite inquiries were made by her loyal acolytes such as, "What's the name of your new album?", she refused to tell us, then it was more caterwauling and off to await the standard cries of, "more, more". I, on the other hand, was muttering, "less, less", with increasing venom much to the displeasure of two big boned chicks to my left who smelt as though their perfume of choice was Toilet Duck.

Check out the thread on the CLUAS discussion board relating to this review, the lowest scoring review to date on the site.