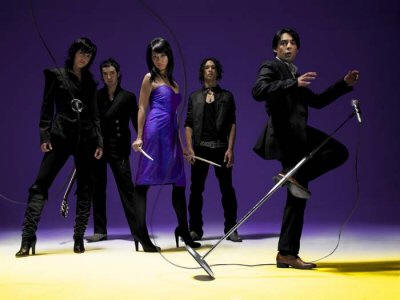 Review Snapshot:
2005's most glamorous new band bring their Bolan/Prince-fuelled pop thrills to the spiritual home of photogenic showing-off. Unsurprisingly, everyone is delighted.

Full review: "April in Paris!" gushes Dante Gissi in his soft Glaswegian accent. And why wouldn't he be all lovey-dovey? With tons of airplay, rave reviews and a sold-out show, it's clear that Paris and France have taken to El Presidente.

With good reason, too. Their debut album was a rush of glam-funk-rock-disco-whatever with catchy tunes and attitude to burn. Live, the funkier element is more pronounced than on record. Think of the best bits of Bolan, Prince and George Clinton stitched together, made to be worn strutting and swaggering.

El Presidente can certainly walk the walk. There's bassist Thomas McNeice, dreadlocks flailing and shirt open to the navel. Statuesque drummer Dawn Zhu blanks out the hordes of indie-boys trying to catch her eye. Sunny keyboardist Laura Marks, ever ready to start a clap-along, laughs off a sore throat and sings her heart out all night. And is that young Johnny McGlynn from Boyle throwing theRory Gallagher rock-hero shapes and chopping out the skintight riffs of "Turn This Thing Around"?

Up front, the man in the tangerine suit may sing like Axl Rose and dance like Daniel O'Donnell, but Gissi has otherwise honed his rock-frontman moves to perfection. Tonight his on-stage persona swings between the sentimental wideboy of 'Without You' and the Saturday night cock-of-the-walk of 'Rocket', and he's always compelling to watch on stage.

The cooler-than-cool pose regularly slips, though - sometimes positively, to reveal the five's unsuppressable enthusiasm and seemingly genuine enjoyment of being pop stars. Other times, though, there are slightly cringe-enducing stadium rock moments that even Jon Bon Jovi would shirk from - the encouraged waving and clapping-along, a chorus of "doo doo doo" from 'Walk On The Wild Side' slipped into the groove of 'I Didn't Really', and Gissi handing out roses from the stage when returning for the encore.

But these are insignificant in the context of tonight's show as a whole. Indeed, it's to this band's credit that their own songs stand up proudly beside their sparky encore cover of 'Raspberry Beret', tonight's most explicit nod to thelittle purple fella whose influence is felt keenly on this promising band. The slight worry about second-album-syndrome aside - only "Sushi And Wine" complements a set drawn from a debut record already almost a year old - tonight El Presidente seem like the real deal.