It s great going to a gig blind. There s something tediously inevitable about going to see a singer or band you know a lot about. Sometimes they even play the same setlist in the exact same order, making you think that it would be better (and cheaper) to listen to to their CD s in the comfort of your own home with the sound turned up rather than venture out to see them live. 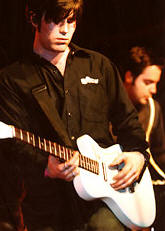 The only thing I knew about Ed Harcourt prior to this musical evening was that his 2001 debut album 'Here Be Monsters' was nominated for that year s Mercury Music Prize. Not the basis for writing a review of one his gigs, some might say, but an unbiased and fresh account of the boy. And the boy done good.

Playing to a strangely muted Whelan's crowd, due chiefly to the fact that the usual gig-goers were probably on the road to Witnness at that stage, Mr. Harcourt delivered a set that would please both fans and novices. Looking far older than his mere twenty-four years, and sporting a haircut reminiscent of Nicky Kelly of The Fat Lady Sings (early days), he straddled his piano like his very life depended on it. Though he played songs from it, it was also refreshing that he didn t feel the need to constantly plug his new album 'From Every Sphere' (which NME described as a treasure trove of sun-kissed grace and magic).

'Hanging with the Wrong Crowd' was the first song the party faithful knew and wanted to hear, a tricky little number that meant a myriad of vocal changes from his usual voice right up to falsetto. From then on he was hangin with the right crowd, as this was soon followed by 'He's Building a Swamp', (from the 2000 EP Maplewood) a glorious affair that was like the bastard offspring of Pulp Fiction and a particularly raucous Mexican carnival. Trumpet, guitars, keyboards and drums all merged to make a beautiful noise. The piano and trumpet led melancholy of 'Beneath the Heart of Darkness' was joined by two other songs from the Here Be Monsters album, 'Birds Fly Backwards' and 'Those Crimson Tears', all exhibiting how diverse the sound of Ed Harcourt and his band is.

The gorgeous 'Birds will sing for us', lullaby-like 'Fireflies Take Flight' and rocky 'Undertaker Strut' showcased Ed's new material, and all showed how different his sound can be when compared to one of his earlier songs, 'I've Become Misguided', which was so close to jazz you may as well have been in New Orleans at Mardi Gras.

Inevitably, there were some minor political musings as Ed addressed the crowd on Tony Blair and George Bush. Thankfully, this didn't last long, the crowd preferring for him to get on with the music. For his one and only encore (perhaps saving his energies for Witnness over the weekend) he played 'Metaphorically Yours', also on 'From Every Sphere'.

Ed Harcourt is impossible to categorise. His styles range from fairly traditional rock and folk, but can then veer wildly to gospel and even jazz. Though he is an original, I was reminded of bands like Embrace and the slightly gimmicky Ben Folds Five. Maybe he is a true genius (he had over 300 songs written even before he had a record deal!). On his website Ed advises fans to listen to his debut album when drunk, sober, happy or sad and they will make sense. Good advice indeed from a unique talent.