Echo and the Bunnymen

Review of their gig in Vicar Street, Dublin, 24 November 2003

Ah yes, nostalgia. It's big business, you know. Whether it's irritating c-list celebs waffling on about hula-hoops and leg warmers on "I love 1979" to The Darkness, it's the new black (boy, am I glad I kept my PLO scarf, your time will come again soon, my precious). And nostalgia is the plat de jour at Echo and the Bunnymen. I must admit a certain fondness for them as they were one of the first bands I ever saw live, a sweaty, euphoric National Stadium affair, at the height of their fifteen minutes. As a result, I usually go to see them when they play Dublin - it's a sort of homage to my youth, when you could walk the streets at night, a pint was 70p, grumble, grumble, bah humbug etc etc. So, it is no great surprise that most of those assembled in Vicar Street are similarly challenged in years, let's just say thirtysomething, to be charitable. Vicar Street is one of my favourite venues, reasonably comfortable, good bar facilities and great acoustics yet every time I go there, I find something that irritates. Tonight it is the punter guarding the wash basins in the toilets armed with a bottle of soap in one hand and a bottle of cheap, nasty aftershave in the other ("Ravage Me", I think it was). Having paid thirty quid to get in the door, the facilities really shouldn't be held ransom. 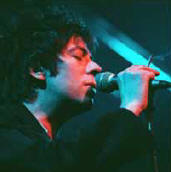 As for the gig, Ten Speed Racer warmed things up. They rocked hard to a small and largely disinterested crowd. They are a tight as hell but there is strange sameness about all of their songs. By the end of their set, there is no outstanding tune. Still, judgement best reserved for their album. The Bunnymen take to the stage at 9:30, McCulloch is in full swagger looking dishevelled, sporting the obligatory shades, pouting and generally looking like a man one hundred percent convinced he fronts the best band in the world. They pretty quickly begin to crack through many of the favourites the crowd came to see. Songs like "Rescue", "Seven Seas" and "The Cutter" are top notch - Will Sergeant's pinging guitar always add a new layer to these tunes live as opposed to the slightly over produced album versions. "Bring on the Dancing Horses" is probably worth the admission alone with its crunching and downright chilling chords. All of this is interspersed with McCulloch's impenetrable Liverpudlian banter. The first couple of times I saw them, I thought he was too drunk or stoned to be coherent but I'm beginning to think its all part of the show. Still, he has it where it counts; his vocals are as powerful and sonorous as ever.

It was all going so well until about half way through when they pretty much lost the crowd. Basically they gave up the family jewels in the first part of the show and drifted off into newer material and album tracks for the second. Personally, I quite enjoyed this part of the gig but the crowd became restless and disengaged; I guess most people, myself included had mentally ticked off the greatest hits and were wondering what the hell else was left in the armoury. By the time they finished up and encored with "Lips like Sugar" and "Nothing Ever Lasts Forever", the crowd were essentially going through the motions of looking for the fabled "one more tune".

So, the gig isn't exactly a life altering experience. Yes, they are trading on former glories, with most people there really only interested in songs from the eighties. But what timeless, atmospheric gems those tunes are. Nearly twenty years on and the opening notes of "Killing Moon" on the film soundtrack of "Donnie Darko" can send a shiver down the spine. Nostalgia it might be, but it still has a bite.

Check out an another review of this Echo & the Bunnymen gig.

Check out the CLUAS review of Echo & the Bunnymen's compilation album 'Ballyhoo' (released in 1997).