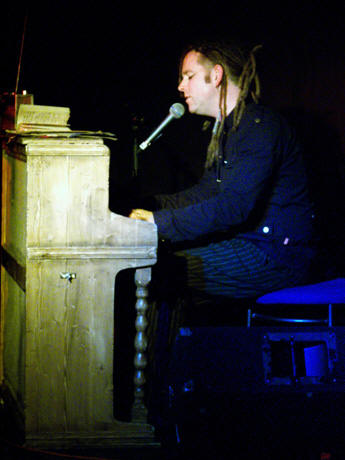 Review Snapshot:
It's easy when writing a review to simply give a song-by-song rundown, but in all but the most unexciting gigs, this will do nothing to tell of the atmosphere and the energy and the overall effect it has on the listener. Doing that to any Duke Special gig does no justice to the idea behind him and his gigs, where it's not just the songs themselves but the entire package of performance, affecting honesty and offbeat entertainment that leaves you amazed in its wake.

Full review: The first time I encountered that distilled beauty that is the music of Duke Special was on the rather lacklustre Adventures in Gramophone. Although the germ of what was to come was planted therein, the impression it left was minimal at best. The second time I encountered the Duke of moonlight pop was in The Sugar Club a number of months ago. This time he left a dent.

The Sugar Club gig took place before national fame and popularity overtook Duke Special, and while it's difficult to begrudge him his success, the fact remains that the intimate, seated crowd of that gig suited him infinitely more than the large-scale, special-guest-infused affair of his Tripod gig in March. Still it's just so difficult to fault a man who can make your heart bleed and your head pound with barely an effort.

There's no accounting for taste: half the population of Ireland have spent the last few months lauding the virtues of Duke Special's two support acts, whereas the other half, including me, feel they turned the show into some form of musical circus, with homemade instruments and a style that sacrificed quality of music for idiosyncrasy. It was almost a relief when Duke Special and his motley crew took to the stage.

Featuring his trademark use of the sounds of a '78 and a gramophone (which later met its end in an overzealous finale of Duke (a.k.a Peter) throwing his piano around to the sound of Last Night I Nearly Died), there was also a few surprises thrown into the mix. The brothers Allen from Hal provided uninspiring backing vocals for a number of songs, while Neil Hannon of the Divine Comedy played his usual role of entertainer rather than just musician.

The songs from Adventures in Gramophone and this year's Choice Award nominated Songs from a Deep Forest are infused with a tingling beauty, but are also infected by a somewhat passionless delivery and are energy deficient. In a live setting however, each is given a new life and wild unrestrained passion, assisted greatly by a band of people who are true performers at heart.

With the kohl-eyed, soft-voiced, dreadlocked Belfast songster pounding like some sort of wild bear at the piano, the arty guitarist and clarinet player happily taking the back stage and drummer temperance society Chip Bailey not only crashing around the stage but into the audience too, the band themselves are no ordinary musicians, and this gig no ordinary gig.