Review of their gig in the Olympia Theatre, Dublin, 28 February 2005 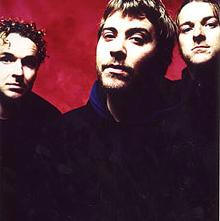 Review Snapshot:
Manchester band Doves come up with the goods for their return gig to the Olympia, having just released their third album proper 'Some Cities'. Cluas writer Dromed is impressed once again with their distinctive sound.

Full review: Brothers Andy and Jez Williams and Jimi Goodwin take to the stage with their usual unassuming, modest poise and launch straight into a fantastically thumping version of 'Pounding'. There's no need for introductions here. The Olympia is full to capacity with a crowd that has been waiting for Doves to return to Dublin for quite a while now and they give the band a warm welcome.

Surprisingly, the set is a mix of old and new songs, even though this tour comes on the back of the release of their latest album 'Some Cities' (see CLUAS review). A majestic rendition of 'Words' gives a perfect example of how their attention to detail and layering of sounds gives them that magical quality. The beautifully sweeping keys come courtesy of Martin Rebelski, who has recently released his own album 'Stickers On Keys' on Twisted Nerve Records.

Between that and the addition of some soothing and ghostly backing vocals, the whole live performance carries an atmospheric, cinematic quality. Subtle, but effective use of lights and visuals add to this. The songs are often epic and emotive, with lyrics that portray the struggle of a bunch of humble Manchester lads looking for their places in the world.

But it's not all melancholy and self-musing. Doves know how to step it up. The piano driven 'Black and White Town', their recent single, has a lovely northern-soul tinged upbeat swagger about it. Jimi sings "You should follow / Me down / There's no colour and no sound / In a black and white town" and sounds confident and defiant, rather then morose. The song begins with an uncanny similarity to Martha Reeves Motown classic, 'Heatwave' and exudes the same irreverent energy.

'Sea Song' touches on something really precious and the crowd is caught up in the moment. Jimi's voice is soaring and pained, he sings the lines "Drown with me" and "Leave in peace, let me be" like a man that has faced his share of personal demons and heartbreaks. When he sings, you know he means it.

The mood is lifted by the anthemic 'Caught By the River' and 'The Last Broadcast' is heart meltingly good. In fact, the crowd has to compose itself a little afterwards, or maybe that's just me. From the balcony I can see a sea of faces of people being genuinely drawn into the experience. Doves always manage to connect with their crowd in a really warm way and it's a pleasure to watch. The new songs are listened to attentively and gel easily with older material.

They close, after a short encore, with 'There Goes the Fear', the single they released and deleted on the same day, from their Mercury Prize nominated album 'Lost Souls'. The guitar sounds hazy and day-dreamy, while the video for the song plays in the background. The Brazilian carnival drum rhythm outro is a great note to finish on and the band seem pleased with their performance and just a little taken aback by how much the audience has taken their songs into their hearts.

Check out the CLUAS review of Doves live in the Olympia back in 2002.

Check out a review of the Doves live in Boston in 2001.