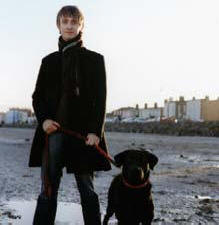 Review Snapshot:
Delays with trains meant I only caught half the Divine Comedy gig in Dolan's but from what I did see, Neil seems to have returned to winning ways with his current tour.

Full review: We arrived in Dolan's on Friday night to a Divine Comedy gig already in full swing, with an enthralled audience worshipping at the feet of Neil Hannon. Whatever he had done for the previous 40 minutes had worked, and the mostly middle-aged audience were swaying and singing along in time to the music. Unfortunately a delay on the train from Dublin, meant we only caught the second half of the gig and although I'm not a huge fan of the band I would liked to have been there for the whole thing. We were not the only ones to be hit by delays. I initially thought the tears from a girl behind us were due to excitement at seeing her idol, but subsequently found out she'd only made it there for the last two or three songs of the set, delays with a taxi in her case.

Neil looked more relaxed than usual, gone are the stiff three piece suits and orchestra of old and in their place a more casual attire with just a double bass and button accordion as accompaniment. Ian Watson is a virtuoso on the button accordion and along with Simon Little's double bass gave a depth and verve to the songs which more than compensated for the lack of a string and brass section.

"National Express" had the whole crowd shouting the chorus and bopping around. "Absent Friends" the title track from his latest album was less well known but just as well received. Neil moved to the keyboard for one of the songs and showed he's just as proficient on the keys as on the guitar. He was chatty and kept up the banter with the crowd throughout the show, while sipping his pint of Guinness. At one point though he was completely thrown by a woman in the front row shouting something up at him and he got confused with the words and started the same verse twice. He didn't seem too impressed, but laughed it off. "Something for the Weekend" produced a great reaction from the crowd and I even found myself humming along. Regardless whether you like him or not you can't deny he writes catchy pop tunes that get under your skin. He sampled songs from many of his albums and included "A Drinking Song" from the 1994 release "Promenade" and "Mastermind" from his most recent album "Regeneration".

The incessant low chatter from the crowd - which seems to be a part of the Dolan's experience - didn't upset me too much but I saw from messages on the band's website I wasn't the only one to notice it. I'm not sure why it is always a feature of the gigs there but maybe it's the set up with the bar downstairs. The band played an encore to much encouragement and could have played for many more hours if the reaction of the crowd was anything to go by. All too soon he was gone and even if I'm still not a converted Divine Comedy fan, I can no longer deny his appeal. Next time I go though I'll try to get all the set, maybe I'll catch the bus!