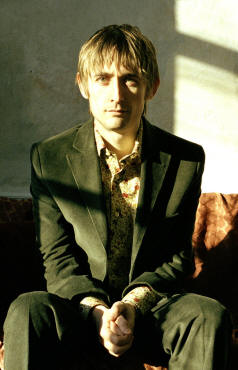 Review Snapshot:
The premiere of Neil Hannon's new band and songs is a mixed affair. The new material is nothing to get excited about. Fortunately, Hannon can call on plenty of hits to save the day.

Full review: "I'm sh*t", admits Neil Hannon to his Parisian devotees tonight. He's only referring to his level of French, though. His inability to get past the most basic of the local cupla focail is the running joke of tonight's show, the first to feature both the new Divine Comedy line-up and material from the forthcoming album 'Victory For The Common Muse'.

The Divine Comedy in Paris is almost a home-town gig. Hannon's brand of bookish parlour-pop has always found a natural fanbase in France's art-lit circles, while he himself cuts the classic figure of the well-read Irishman wandering round the home-from-home of Wilde, Joyce and Beckett. His songs burst with Francophilia - even without the diplomatically-omitted 'Frog Princess' he can summon up the Revolution-era antics of 'In And Out In Paris And London' and 'Charge', the latter thundering around this rickety old theatre at the foot of Montmartre. An unexpectedly poignant moment comes with 'Generation Sex' and its allusion to Princess Diana's fatal car crash just across town.

Ever the Irishman, Hannon cracks open an on-stage can of Guinness before realising that he's expected to sing 'If', featuring pop's most unlikely lyric of tender love: "If you were a horse / I'd clean the crap from out your stable / And never once complain". Especially in the city of romance, it still sounds hair-raisingly beautiful.

Unfortunately, first impressions of the new material are disappointing. First-night rustiness can't explain away the simpering 'Mother Dear' and bland 'Light Of Day', two tracks which recall the smug self-satisfaction of 'Fin de Siecle', the weakest of Hannon's albums. Meanwhile, 'A Lady Of A Certain Age', with its name-dropping tale of a woman swanning around Lake Geneva wearing Givenchy and sipping Campari, could be an updated version of 'Where Do You Go To, My Lovely?'. Unforgivably, it rhymes "Surrey" with "in a hurry". Add the pointless romp through The Associates' 'Party Fears Two' and it all bodes ill for the new record. Only the (yes!) '80s funk of 'Diva Lady' sounds promising. Time will tell.

As for the old songs, the most rapturous reaction is for the rumbling 'Tonight We Fly' and the joyous 'Something For The Weekend', both showcased immaculately by a seven piece line-up understandably reluctant to experiment, improvise or relax on their first night.

Nonetheless, tonight's oldies do the job in sending the punters home happy. Whether they'll be similarly satisfied by the new album is another question.

Check out the CLUAS review of the Divine Comedy album'Regeneration'