The first time ever I saw Declan O'Rourke was in Tower Records in September 2003 when he was accompanying Paddy Casey-Casey who had just released 'Living'. I kept finding my attention being drawn to this man's guitar playing and was nagged constantly by the notion that somehow, he looked vaguely familiar. Of course Declan O'Rourke was Casey's guitarist for quite some time at that stage and has now parted ways in an effort to establish himself in his own right. To emerge from under Casey's (admittedly) small shadow, and blossom in the light of singer songwriterdom, if you will. Having returned to Ireland after a four year sojourn in Australia, he has spent the last number of years gigging around Dublin and the rest of the country. And playing with Casey. Most of this has been relatively low key. 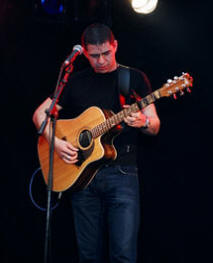 So in what is surely an attempt to rapidly raise a solo profile he has been playing a multitude of support slots at Dublin's Vicar St over the last 8-10 months as well as gigging (yet again) in more venues around the country. Which all may explain the growing public awareness of this man's talent. Indeed Declan O'Rourke's profile, while still relatively small, has risen considerably in the first half of 2004. He is that rare thing, a singer-songwriter who can actually play the guitar. And play it well. He stands out even further from the 'one man and his guitar brigade' thanks to the nature of his songs. Absent is the suffocating introspection and navel gazing often found in this particular club. Instead O'Rourke's songs are comprised of fictional characters via historical events (i.e. the Famine-told through the eyes of a priest in 'All Along the Western Seaboard') and optimistic, even buoyant love songs ('Your World', 'Love Is the Way)

O'Rourke's previous Whelan's show (Valentine's Night) was a low key affair populated by the curious and the knowing, so even his closest followers must have been surprised at the queue forming outside the venue as gig-time approached. As such there was a real buzz before he came onstage. Would this gig affirm all the good things that had gone before or collapse beneath the weight of its own - albeit modest - pressure?

Striding out to rapturous applause, O'Rourke proceeded to sing his first song completely unaccompanied. No guitar. A melodious, Irish style lament was enough to bring an abrupt hush over the crowd. O'Rourke has sung this song before, usually as a closer to a gig - this time though it was the perfect opener. An immediate attention grabber. It was followed by a couple of new songs, some with a distinctive, almost jazz-type feel to them. While one was a 'pop song' to use Declan's words. The set then moved on to tunes more familiar to those with even a remote interest in the man in question.

'Your World' and 'Love is the Way' were duly accompanied by an (initially) reluctant crowd, with Declan goading and eventually leading everyone in repeated renditions of the chorus of 'Love is the Way'. 'Last Night in a Dream' (affectionately known as 'Sarah' and, as O'Rourke admitted himself at the gig, probably his own favourite song) was given a delicate dreamlike ambience by cello accompaniment and sparse drums. Between each verse it saw Declan's guitar playing come to the fore with a frenzy of finger-picking.

But one song in particular tends to shine at most of his gigs and did so again this night, 'All Along the Western Seaboard'. According to O'Rourke this song will not be on his forthcoming debut album. If this is so it will be an absolute travesty. Quite why he would leave out a song of such strength, momentum and sparkling guitar is a mystery, plus the fact that it got the loudest reception of the night.

Nevertheless word is spreading and Declan O'Rourke is busy forging his own path: securing his biggest crowd yet for a Whelan's show and planning to record an album in July 2004 with a planned release date of September.

Although his open, easygoing almost boyish onstage manner is appealing it has to be said that during this gig gaps between songs were sometimes needlessly long and they weren't helped by Declan often filling them with, what most would agree was, quite a lot of incoherent mumbling. Naturally the crowd became slightly disinterested after a while. Nonetheless can be thought of as a minor quibble thanks to the qulaity of the music performed.

Check out a review of Declan O'Rourke live back in 2001.