Every now and then at a gig, a somewhat trivial moment can reveal just how much progress, or indeed lack of, an artist has made. For instance, that moment at tonight's David Kitt show was during his first acoustic song of the evening ,'Whispers Return To Sun'. After giving an even more delicate rendition of the song than the 'Big Romance' version, and playing the song perfectly throughout, he hits a bum note towards the end. While such carry-on from Kittser would have in previous years yielded a few sighs and mutterings, on this occasion it was greeted by cheers of goodwill. 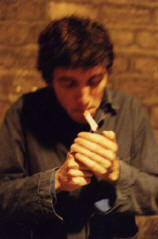 Indeed, the whole David Kitt live experience has transformed radically from affairs of old. While a few years back he would have sauntered on stage with just a couple of members in his band, this time around he has brought six other musicians under the moniker of The Echoes. And what a bunch he has assembled - The Redneck Manifesto's Mattie and Richie, a keyboard player who does harmonies like you just don't hear any more, and trumpet player Brian who also specialises in prancing around like a mixture of Bez and one of the Polyphonic Spree. As the show goes on, it becomes obvious that this expanded line-up is crucial to tracks from Kitt's new album 'Square1', and also to re-workings of some of his old favourites.

Nearly every review of the new album thus far has focussed in on the wedded bliss chez Kittser. It is certainly hard to avoid this, as from the moment he steps on stage and kicks off with 'Me and My Love', it is clear that the most vital difference in Kittser's onstage persona is the complete and utter look of satisfaction that rarely leaves his face. He smiles constantly, and applauds the crowd himself after nearly every song. 'You Know What I Wanna Know' is dispatched early, almost so as to help break up some of the newer songs.

While the album is only out a few days, songs like 'House With Trains' and 'Dance with You' have already won themselves a place in many fans' hearts. Much has also been made of the change of direction in Kitt's music, with soul and funk starting to play a more prominent role in the new songs, and a glorious interpretation of Jackie Wilson's '(Your Love Keeps Lifting Me) Higher and Higher' thrown into the mix. Some of the older songs sound magnificent also, especially an absolutely euphoric 'Into The Breeze'.

Tonight, David Kitt looks like the happiest man alive, and the melancholic nature of some of his earlier work has now been overpowered by this sense of joy. When one couple waltz during one of his songs, Kitt even quips that 'I know how ye feel'. While he still sings on 'Another Love Song' that "I can't fall in love/if it's a danger to my health", it is clear that David Kitt has found love and isn't afraid to sing about it.