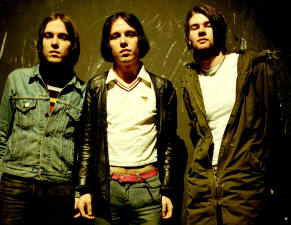 Review Snapshot:
A sketchy performance from Wakefield indie punksters The Cribs fails to win over a fairly packed Whelan's crowd.

Full review: You know that feeling when you read the opening chapter of a book and it grabs you from the very first sentence? Well, you know that other feeling where the second chapter makes you want to slap the author across the face for making a total mess of it? That's what a Cribs gig is like. The Cribs are the Dean Koontz of the indie rock world - slightly dark, always on the verge of but never getting popular, exciting in parts but lacking a consistent flow. Koontz wants to be Stephen King while The Cribs want to be The Jam. Somehow these two transformations look very unlikely considering the level of performance being shelved out.

Support on the night came from Irish rock vendors The Marshal Stars, a 3-piece band that present a shaggy guitar sound that is wrapped up in a glitzy overcoat. With vigorous renditions of the excellent tunes 'Make Her Cry', 'Royal Blood' and the swampy misadventure that is 'Sophia', they proved to the pint-sipping crowd just how good they are. Most people in attendance seemed mystified as to who they were but as soon as the last chords of 'Simple Things' echoed through the crowd were mentally noting down their name. Expect bigger things from this band when they finally release their debut album over the coming months.

And so it was onto the main act. Opening with the riotous 'Hey Scenesters', The Cribs combined some spiky guitar riffs with collected shouting. The shouting continued thereafter and quickly became an annoying feature of their set, especially when Ryan Jarman took the time to actually sing they became a very engaging band. Latest single 'Martell' elevated the atmosphere slightly and 'We Can No Longer Cheat You' seemed ironic as repeated song patterns tested the patience of the not-so eager crowd. The Jarman brothers (Ryan, Gary and Ross) did try hard to keep the momentum pumped up, it's just that their songs let them down.

Even with traces of early Smiths in their lyrics and some decent guitar playing, The Cribs failed to entertain for the entirety of their set. There are plenty of other bands around today who are similar but have the ability to engage a crowd - e.g. The Rakes, Maximo Park, The Things. Ultimately it fell down to three questions 1) Where is the element of surprise? 2) Why did they spend more time guzzling beer and shouting into the mic than actually trying to sing? 3) Why weren't they be the support act and The Marshal Stars the main performers on the night?

The Cribs tried their best but it simply was not good enough. Just like reading a Dean Koontz book and only liking sections of it.