Review of their gig in The Village, Dublin, 16th January 2005 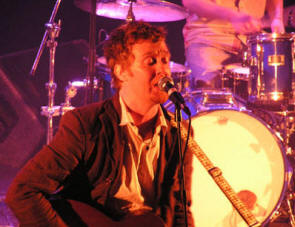 Review Snapshot:
A benefit gig in aid of the Tsunami Appeal with The Frames disguising themselves as The Cleary's so their loyal fan base actually have a chance of getting tickets to see them.

Full review: The Village opened their doors at six o'clock for this event, in turn making it an all ages gig. By twenty past six, the venue was packed. All of the charitable folk that gathered on this brisk Sunday afternoon gazed toward the lone troubadour on stage. Mark Geary was armed with a yellow necktie; a tanned acoustic guitar and an array of his auspicious tunes that brought always bring a delectable tint to his set. 'Suzanne' and 'Morphine' were gobbled up as the songwriter unleashed a hybrid of old & new songs. Matthew Devereux joined him onstage and before long the crowd were rejoicing to the ever-popular Mic Christopher song 'Heyday'. It was another solid performance from one of the best Irish singer/songwriters around at the moment.

The smoke machines were turned on and the lights came down. Excitement echoed through the Dublin venue, which quickly morphed into full-fledged fan fever when The Cleary's arrived. The opener 'Keepsake' floated by like a mournful dirge while 'A Caution To The Birds' added some much needed energy to the beginning of the set. When the early timid sounds of 'Dream Awake' crept from the large speakers, it was unusual to notice that the crowd reacted in almost quarrelsome manner. In contrast to this surprised response, it is typical behaviour of Frames fans to transform a small venue into a haven of stadium-sized proportions with the atmosphere they create. The enthusiasm and passion that Frames devotees have brought with them over the years has not only been impressive but a powerful statement that their loyalty is as strong as ever on the eve of The Frames' worldwide release of 'Burn The Maps'. They deserved this gig and deserved the excellent version of 'Finally' that followed.

A labyrinthine take of 'Lay Me Down' with Joe's bass churning out some clouting rhythms came before a confessional slipstream of midway rock in the shape of 'Plateau'.

Next up came an aching version of 'Happy', followed by the unbalanced structure of 'People Get Ready' with each instrument straying off on meandering avenues, an unneeded insert of 'Trying', a compelling take of 'Fake' and a superb 'Pavement Tune' quickly came after. Deep breaths were then inhaled, drinks were sipped and a thirst for more of the same quenched throughout the crowd. The integral part that Colm plays in this band was given its spotlight on 'Bad Bone', a compelling number and few seemed to know. A rollicking 'Underglass' then came before a calming 'Star Star' with 'Hotel Lounge' mixed in at the end for good measure. The band then bowed and left the stage.

It was under two minutes before the band reappeared and started into an instrumental before a sauntering account of 'Early Bird'. A real seriousness was attached to 'Friend And Foe' while 'Revelate' and a cover of the Pixies classic 'Where Is My Mind?' had the crowd bouncing around. The tempo was again brought down with the stirring 'The Blood', the wonderful 'Devil Town', the well-executed 'Dance The Devil' and the effective 'Suffer In Silence', which was a fitting song to end on and for what this gig was raising money for.

Overall the gig was another really good performance from The Frames and supported by the ever-charming Mark Geary.