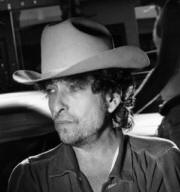 Review Snapshot:
Bob Dylan rolled into Galway one beautiful weekend in summer 2004, marking the open-air gig debut of the city's newly rebuilt Pearse Stadium. Hugh Tynan joined the throng which gathered to see the septuagenarian performer put on yet another strong show. A positive atmosphere and an accessible sprinkling of old faves soon had the crowd roaring along with the grizzled folk legend, while the Salthill air filled with the energetic clamour of his sturdy back-up band. Guess he's gone electric...

Full review: A large but wobbly young fella with a military crew-cut was pushing clumsily past the three older gentlemen beside us. They looked like sixties vets, probably even original Dylan followers: but now with grey beards neatly trimmed, and wearing sensible waterproof jackets, with special inner pockets for their camera phones. As he jostled his way by, standing on their expensive sandals, the happy youth grabbed one of them by the shoulders. "LIKE A COMPLETE UNKOWN!" he bellowed into the bemused face, before smiling widely and pinballing deeper into the congregation. A pleasant intergenerational exchange? The hippy spirit infecting a crowd of Galwegians more accustomed to holding tightly onto their wallets when out in public? The magic of Bob Dylan's anthemic 'Like A Rolling Stone', pealing down from Pearse Stadium's first rock-gig stage and washing the 28,000 reported attendees in its timeless, almost rabble-rousing glow? Who cares? I thought it was pretty funny, and so did the greybeard.

The gig was funny too. Dylan marched on only a few minutes late, wearing what looked like a black cowboy suit and a white stetson. The set was fairly strong and offered a fair mix of eras; he opened with 'Rainy Day Women #12 and 35' which, unsurprisingly, got the West of Ireland masses excited. 'Forever Young' was in there somewhere, plus 'Tangled Up In Blue', a countrified 'Tambourine Man', Highway 61 Revisited', and a few more (sorry, setlist obsessives, we didn't take notes). Bob sat at the edge of the stage throughout, craggy right profile facing the audience, banging on his keyboards, singing, and wheezing through his harmonica, while his impressive band of seasoned-looking pros churned out the obligatory 12-bar boogie between verses, padding already-long songs into ten-minute workouts. To be fair though, they played for nearly two hours. With no giant screens and a promoter's ban on human pyramids, it must have been hard to see the figures on stage from the back, or the stands; it was hard enough from the centre of the field. The sound quality was excellent, thanks to the massive suspended speaker stacks swaying gracefully in the warm Atlantic wind. The occasional seagull or blackbird came swooping lazily over the hordes below, dropping an inevitable splatter of faeces onto a couple of random revellers, then curving back out toward the bay, frightened by the volume.

Dylan only spoke once, between encores, to introduce the band, and sounded like he was parodying himself when he did ("playin' on the bass geetar, Mr Whosis Whatsisname!"). The time zipped by in a mood of mostly cheerful bonhomie, although those queuing for upwards of an hour for overpriced, sugary, watered-down plastic cups of beer would probably disagree. And maybe also those who had sat or stood through the promise-breaking support line-up (sorry, Aiken, but Paddy Casey and Gary Moore don't count as "major international acts" when they're playing at home). But still: things have changed, for sure, when you get the legend himself doing his thing in a venue more commonly used for community games.

Hell knows what Bob himself thought of it all. Another million bucks in the heel of his Spanish leather cowboy boot, or a chance to connect with a new audience? Then again, if he approved the ridiculous spoken intro which preceded his appearance ("he emerged from decades of substance abuse to forge a new identity as a rock legend", or something like that) then his every motivation must truly be a mystery. But perhaps it was ever thus? Anyway, as he might say himself, don't look back. Don't look too closely at the old geezers on the stage. Certainly don't look at your bank statement after shelling out for the tickets. But don't think twice, it's alright.