Limerick band Sutras opened the gig and though we missed the first few songs we were on hand to hear some of their better-known tracks. Formed in 1999 they have enjoyed increasing success with their songs 'Princess', 'Believe' and 'Superhero' benefiting from radio exposure on the likes of Phantom, 2FM and Today FM. Spread across the stage were four guitars, 2 keyboards and a drum kit. They were certainly loud and rocking. Following 'Believe' they played a piano ballad, although I think they succeed better with the louder songs. They received a great reception however, especially for 'Lonely Ones', which went down really well with what was mostly a student crowd and it was great to see some home-grown talent on show. 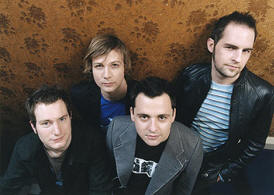 The Bellies arrived on stage to a warm Limerick welcome and started their set with what to me was a strange choice, 'Daybreak' from their current album 'Music in Mouth'. Their mellow start was at odds with the rock of Sutras before them and they failed to capitalise on the momentum that had built up. The talking continued on the floor in Dolan's and the audience didn't seem to be really drawn into the music. However Paul Noonan, the lead singer, has blossomed in the roll of rock star and looked totally at home leading the band, he has definitely settled into his position front-of-stage after coming out from behind the drum kit. He's much taller in real life and in his blue T-shirt had all the right moves, acting up on stage and managing to break the microphone stand in his enthusiasm during 'Snakes and Snakes'. This song managed to shake the crowd up but was followed by 'Slowset', played with a country feel to it, from their debut album, which continued the leisurely pace.

On 'Alphabet soup' the connection between Paul and Dave Geraghty was blatant. Paul may be the leading man but Dave with his prowess on guitar, banjo, keyboard and harmonica adds variety and layered texture to their sound. Backed up by Brian and Dominic, they're very much a tight foursome. 'Bound for Boston Hill', another laid-back song, was next up, followed by 'Next to you', a beautifully arranged ballad with Dave's harmonica used to great effect. By this stage the crowd were impatient for some faster songs and someone shouted out that they wanted to rock, though Paul handled it with his characteristic calmness and said before they rocked, they wanted to play some slow ones.

Paul exited stage left for the opening of 'Offshore' and Dave at his keyboards did a fine job starting the song with Paul joining in on the harmony. Then, not as if the crowd needed an invitation, Paul shouted out "if you're gonna be with us please rock" and started a thumping 'Man on Mir' followed closely by the familiar riffs of 'Tongue' which had the crowd in full rock mode. The song slowed down mid-way through and anticipation built until they came back with a rocked out ending. With Paul hanging out over the speakers giving it his all - the chorus resonating around the theatre, it seemed as if they used any pent up rage inside them on this song and were electric. 'Whitewater song' was next up for the rock and roll treatment. When Paul started 'I'll see your heart and raise you mine' by saying "we'll leave you with this one" the crowd quietened and then all joined in with the "la, la, la's" at the end before they finished it with an excerpt of Johnny Cash's 'Ring of Fire'.

The encore started with 'West of her Spine' and then the eagerly anticipated cover of Justin Timberlake's 'Like I love you' (first performed on the Ray D'Arcy radio show). They really made it their own, slowing it down and including Justin's "break it down" at the end, bringing back the beat with Dave's banjo and then "drums". The new and improved sexy Paul would certainly give Justin a run for his money. They finished the set with 'Blue Rinse Baby' from their first album.

From shaky beginnings they ended the gig on a high note and brought down the house. Finally out of the shadow of their days with Juniper they are an Irish band that does both rock and slow songs very well, even if they're not always given the chance.

Check the CLUAS review of Bell X1's debut album 'Neither am I'.