The release of 'Music In Mouth' in August of last year saw Bell X1 advance their claims as one of the best bands in the country. An album that resonated with witty lyrics, and an assuredness in the studio that belied its sophomoric status (discounting abortive Juniper efforts), the band toured the country to promote it, their ever increasing fanbase realising that Bell X1 were also a live prospect to be enjoyed. 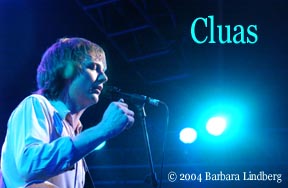 Despite no pressing promotional duties (apart from the pending release of 'Eve, The Apple of My Eye), the Bellies took to the roads of Ireland once more in late March. The band are a unit at ease with themselves on stage. Not for them the overwrought histrionics of their former front man, instead Paul Noonan uses his body to convey his passion, his delightfully idiosyncratic stage mannerisms emphasising the pounding beat of Tongue for example. The gentle humour (dedicating Randy Newman's 'Short People' to Ollie Cole ofTurn), and love of music ('Hey Ya' is referenced early on, then given a full run-out later in the set, and a cap is duffed to Johnny Cash) give a warmth and accessibility to the band, as does Paul Noonan's assertion that he never knows what to say when doing a hometown gig.

Set-wise, 'Music In Mouth' took centre stage, as is to be expected so soon after its release. However, 'Blue Rinse Baby', 'Beautiful Madness' and 'Pinball Machine' all got an outing. Unfortunately, the same cannot be said for 'Slowset'. The crowd, made up of an alarmingly large amount of young girls, seemed to need an invitation to engage with the gig, and appeared to let a lot of the early part of the set (i.e. the slow songs) pass over their heads. It was only when the band kicked out the jams on 'Tongue' that the started giving some energy towards the stage. This in turn led to a scorching run of songs that merged into a high-octane rock out - from 'Tongue', to 'White Water Song', and finishing with 'Blue Rinse Baby'. Up until then it had all been slightly lacklustre however.

A few points struck me while watching the band perform. The new song 'Monkey 61' seems to need a slightly longer gestation period. Despite its wonderfully off-kilter subject matter (the first monkey in space), musically it sounds quite similar to 'Alphabet Soup'. Maybe a recorded version will have more depth to it perhaps. Also, just as the importance of Colm Mac Ionmaire to The Frames is becoming increasingly evident, so is the role of Dave Geraghty to Bell X1. His multi-instrument skills, and considered backing vocals lend a large amount of depth to the bands sound.

Overall then, it was a gig that kicked into life after a slow start, and one which included a gorgeous 'West of her Spine' as the second last song. To borrow a football analogy, the band have proved their ability at this level, now it's time to see how they fair in the Premier League of outdoor summer festivals. Will they be able to preserve the pristine live sound they have managed to achieve at venues like Vicar Street throughout the country, when they hit the green fields? As Bruce Springsteen once noted in an interview with Rolling Stone: "Once you break the ties to whatever it is - your past - and you get a shot out of the community that you came up in, what are you going to do then?"

It's time for Bell X1, along with other Irish bands, to take the next step forward, and stand up and be counted on a larger scale.

Check the CLUAS review of Bell X1's debut album 'Neither am I'.