Review of their gig in the Olympia, Dublin, 8th March 2001 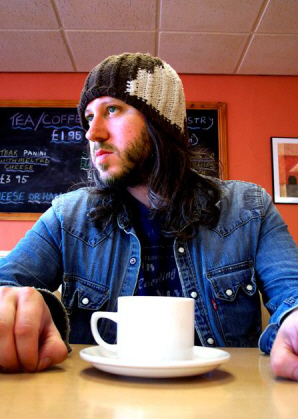 Three-quarter ways through Damon Gough announces, with lazy displeasure, that he knows journalists are waiting to describe this gig as 'shambolic'. However, this is rather the point... because if the performance was new-shoe shiny it wouldn't be Badly Drawn Boy. And we would not be treated to these insights into BDB's extraordinarily ordinary world - where beer-swilling bricklayers experience poetic epiphanies on their lunchbreaks, small miracles are performed in labour wards every day and the beauty of flowers is enough to make people happy.

The performance teeters on the brink of chaos with Badly Drawn tinkering at his keyboard, looking like someone's Dad trying to assemble a train-set (well, he is someone's Dad, now). During such moments the audience waits patiently, curious, for him to pull it back from that brink and somehow he always succeeds. There is a certain warmth behind the slovenliness - an endearing kitchen-sink quality that prompts forgiveness for a voice sometimes so flat it is positively planar and a seeming inability to tune guitars. It is as though we have all been made privy to a casual rehearsal, while the band slouches around between numbers - sometimes playing, sometimes not - lighting cigarettes, sitting, standing, then suddenly snapping on... and Gough is once again the entertainer. Raising arms and hefting hips from side to side in some ridiculous Shaun Ryder parody and, during a jammy, proto-funk workout, clambering over the ampheads into the box to serenade the nostrils of some hitherto unsuspecting female.

Whether we are anticipating a break with convention or assume such a feat to be beyond his organizational powers, we never really expect an encore. The Olympia's strict curfew draws the evening to a close around 11pm, but BDB seems unwilling to leave the stage so early, on this first date of his European tour. Subsequently he refuses to give us any kind of ending whatsoever and the gig sort of peters out, with Mr Gough sauntering offstage to hoots and cheers as the houselights go up.