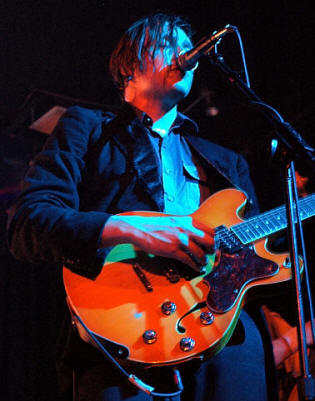 Review Snapshot:
Frustrated by Arcade Fire's second consecutive European tour that skips Ireland, Cluas.com's Ian Wright took a trip to London to catch their biggest headlining gig to date and found that Montreal's finest easily surpass the hype that's surrounded them. For him, life may never be the same again.

Full review: The Astoria is a nasty venue. It's run down and looks like it's about a week away from being boarded up, the bar only sells beer in cans and the black paint that is on everything in the place that could be painted, and as a result helps to turn the venue into a sweltering sweatbox, really needs to be redone. Admittedly there's a pretty good view of the stage from every point in the room so long as you aren't stuck behind the sound desk but it really does make you appreciate how good people here in Ireland have it with the far prettier surroundings of the similarly sized Olympia. Nonetheless the Astoria is where I am tonight and there is nowhere on earth that I'd rather be at this particular moment in time. And it certainly seems that I'm not the only one in that frame of mind.

Perhaps it's just the way that things are done in London but I've never before seen such a scramble for tickets to a sold out concert in all of my gig-going days. Touts are roaming the local tube stations and bars loudly announcing that they'll pay a very good price for tickets, fans with a genuine look of desperation in their eyes are standing in the middle of the footpath shouting "Does anyone PLEASE have a spare ticket" and, if the rumours are to be believed, there's also a waiting list of 140 celebrities of various degrees of fame who have failed to scrounge themselves a pass.

And what exactly is it that all these people are so desperate to get a ticket for? Why am I standing here with a group of indie kid haircuts to the left of me and a middle aged guy who is in no position to do much with what's left of his hair and his partner to my right? Why has one of the people I'm with tonight made the trip from Lyon to be here, for that matter why have I Ryanaired it over from Dublin? The answer to all these questions is the same, The Arcade Fire; and yes, they are as good as we've been told they are.

From the moment the drums kicked in to introduce "Neighbourhood #2 (Laika)" until Reginne Chassagne, the band's occasional lead singer/keyboardist/drummer/accordionist/glockenspieler (or is it glockenspielist) closed the set with "In The Backseat", and during the 10 songs in-between; including 2, "No Cars Go" and "Old Flame" from the 2003's self-titled E.P., the Arcade Fire managed to hold 1,600 enraptured people in the palms of their hands.

Over the course of the night the band gave a performance, which featured stellar renditions of "Wake Up", "Une Annee Sans Lumiere" and "Rebellion (Lies)"; Richard Parry, the band's Napoleon Dynamite look-alike, whacking everything in his vicinity (including a motorcycle helmet) with drum sticks (and he's not even the drummer); and frontman Win Butler, in between frequent (well, 3) trips into the audience, musing on the need to remove the Queen from the Canadian $20 bill and replace her with and ice-hockey player and the inherent evilness and viciousness of parrots.

And then, a little before 10:30pm, it was over. And it was horrible because it had been so wonderful. I was almost prepared to hop on a plane to Amsterdam to catch them again 2 days later.

One thing is for sure, hype and hyperbole aside this is a very special band and when they make their debut Irish show at the Electric Picnic in September you really should go out of your way to be there.