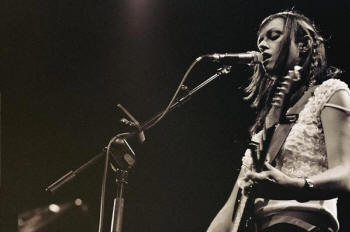 Review Snapshot:
She's Ireland's best female singer-songwriter and her rather under-appreciated latest album 'We're Smiling' was, for me, thebest Irish album released last year by a long margin. Sad, then, that only about 8 people have turned up to see her in The Stables. Yet, amazingly, it turns out to be one of more memorable gigs I've been to recently. Less is more, I suppose.

Full review: The omens are not good for Ann Scott's latest visit to the Stables. It's raining incessantly, buckets of the stuff grimly beating down on the grey streets of Mullingar. The inclement weather and the inopportune scheduling of this gig with the return of local heroes The Blizzards, who are playing a hometown show in an hotel in the centre of town, results in the Stables being virtually empty when Ann takes to the stage. It's a pity, as Scott is easily one of Ireland's more gifted singer-songwriters, her distinct, slightly disquieting approach to song-writing clearly elevating her above the mire of mediocrity that is the Irish music scene.

Nevertheless, tonight she cherry-picks from both of her albums to date - 'Poor Horse' and last year's under-appreciated 'We're Smiling' - and soon the odd, slightly displaced characters that inhabit the world of her songs are made manifest. 'Wilber Clown' is particularly affecting: a quietly brooding piece that engenders strange, incongruent images of sad clowns and empty amusement arcades. 'Imelda' contains a chorus that lodges permanently in the back of your brain like chewing gum to a pavement while 'She: Jubilee' is almost epic in nature. 'Mountain' moves away briefly from the minor chords, containing a hook that shows that Scott could write a decent pop tune if she was that way inclined.

Throughout the gig, on acoustic and electric guitar and a few sequenced beats tossed in here and there, Scott proves to be an engaging and self-effacing presence. Yet there seems to be something more intense bubbling beneath the surface. Nearly every song is laced with a kind of quiet melancholy, often featuring characters that seem lost in this world. It is this effortlessly imagined 'other' world she creates, and the strength of the songs themselves, that make this gig so curiously memorable and far from the non-event it could so easily have been.