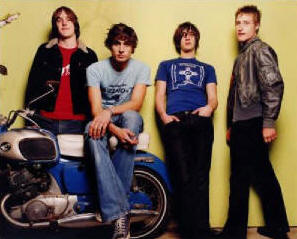 Review Snapshot:
The fans of the All-American Rejects like to scream. They screamed heartily for both support acts. They screamed between sets, whenever songs they liked played over the venue's PA. They even screamed when a young roadie came onstage to check that the microphone was working.

Full review: The All American Rejects second album Move Along, released back in July 2005, has earned them some long overdue success. What's more, a summer of constant gigging and festival appearances saw their stock slowly continue to rise, so much so that Sheffield Foundry was comfortably full on the opening night of the band Rape tour of the UK's medium sized venues.

The opening act which no one seemed to quite catch the name of looked like clean-cut, all-around nice boys. Despite their good looks they were a bit dreary; however they still put on a good performance, although no one really seemed to pay much attention. This may have had something to do with the fact that we never got to see the front man's face as his hair spent most of the night covering it.

Next the crackers Towers of London ascended the stage. Their massive hair-sprayed mullets took up about a third of the venue's capacity and their don't-give-a-shit punk attitude took up the rest. Dirk's fag sparked menacingly as he strummed furiously on his guitar. Gobbing and beer spitting started pretty soon making sure the front row of the audience was at least soggy by the end of the first track. Donny, the front man threw his microphone around manically until it hit the roof with a big fat thud. It wasn't long before he was jumping into the crowd, indulging in a spot of crowd surfing.

The Towers didn't disappoint as they came dressed to impress, with slogans across their vests and pouring out of their mouths. Big hair, big attitude and big mouths go well with the big guitars, big tunes and big show. The Towers of London have been described as being loud, anthemic and punk and declared as the rudest band in the UK since the Sex Pistols, and have been labelled as London's most controversial new band. All these qualities showed in their performance.

Then, the lights dimmed. A thick musk of pubescent sweat hung heavy over the Sheffield venue like a rain cloud before a thunderstorm. Then the screaming started. Despite the All-American Rejects self-deprecating name, Sheffield flooded the four-piece with a whole lot of love. The band opened its set with the single "Dirty Little Secret" in front of the screaming crowd that made no secret about its devotion.

The rest of their songs were a mixture of old songs and songs from their new album. Running through all their hits, there were really very few low points; a very professional performance indeed. As you would very much expect, the crowd erupted, sang every word of pretty nearly every song and jumped around frantically. 'Swing Swing' gained the biggest roar from the audience, and the most crowd-surfers of the evening.

The guitars crackled anxiously, and Tyson Ritter and Nick Wheeler's breathy harmonies soared like they meant it. The All-American Rejects have been described as "A talented band destined for great things, they are primed to be embraced by the masses" and this certainly showed on the night. What I thought was so impressive was how confident and assured they seemed on stage.

The show closed with the appropriately titled song 'The Last Song'. They have most definitely matured as a band, and delivered a great show. Although it was a lot shorter than most would have liked, it's safe to say the screamers - and everyone else for that matter - left with a smile.