Unless you were R.E.M., melding a literate, romantic 60s folk sensibility with 70s art-punk attitude was never easy in the 80s. Just ask Australia's "Go-Betweens". They plodded a frustrating path throughout much of that decade, changing record labels as often as they hopped back and forth from England to Australia in a determined attempt to get their career going full steam. The fame they desired and richly deserved always eluded them. 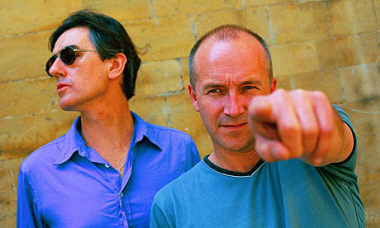 The band sputtered out at decade's end, with Robert Forster and Grant McLennan - the GB's two singers & songwriters - going on to solo careers. Both made some fine records in the 1990s, but the contrast between the arty Forster and the poppier McLennan has been sorely missed by Go-Betweens devotees. This is a small but passionate group of folks, who were well in evidence at Forster and McLennan's recent appearance at San Francisco's Great American Music Hall.

The duo were on an acoustic tour of the U.S., performing all the old GB's favourites in small clubs to worshipful audiences. The feeling at the Great American that night was akin to a long-overdue gathering of old friends. Everyone recognized everyone else immediately as fellow fans, and conversation flowed easily. Rather than everyone crowding the stage, the audience were seated at tables, nightclub style, which lent a casual, intimate feeling to the venue. More than once I thought to myself as I recalled the many hockey-arena horror experiences of my youth, this is how music was MEANT to be listened to.

In some ways I had to be grateful that the Go-Betweens weren't successful in their day, or this show would have been held at the Shoreline Amphitheater, they would have been backed by a slick, professional rhythm section, and the tickets would have cost a hundred bucks.

The pair took the stage with nothing more than their guitars, Forster nattily dressed in a light-colored suit and red tie, and McLennan scruffy in jeans and a t-shirt. Beginning with "The Devil's Eye," from "16 Lovers Lane," the GB's final record (now criminally out of print in the U.S.) they went on to play just about every song a Go-Betweens fan could want to hear.

The pair alternated on lead vocals. Each man's guitar-playing style perfectly complemented the other's, and the songs suffered not a bit from the absence of a rhythm section. In some cases they sounded better, stripped of recording touches like synth effects and drum machines that were commonplace in the 1980s and that slipped onto their records on occasion. Devoid of such frills, the songs were freshly revealed to be much less dated and a lot sturdier than I ever imagined. It turns out Forster and McLennan created one of the strongest bodies of work that most people have never heard!

Forster did a humorous take on "Danger in the Past," the title track from his first solo record. The audience was also treated to McLennan's "Haven't I Been A Fool" and "Easy Come Easy Go," from his "Watershed" album. Other GB's classics performed included "Bachelor Kisses," "Right Here," "Spring Rain", "Streets of Your Town," and "Love Is A Sign". They were called back for four encores, and graciously played "Rock & Roll Friend" and the singular "Cattle and Cane." The final encore was "Head Full Of Steam."

The best news of the evening though was the announcement that that they are planning to make a new record together. Someone in the audience shouted "FINALLY!" and Forster had to chuckle at that.

When everyone at the show went to work the next day and was asked by colleagues, "So what did you do last night?" there must have been many rather lengthy but hesitantly offered explanations. "Robert who? The Go-Be -what? Wasn't that some Eighties band? Did you have a good time? Well, okay. That's cool, I guess." Little did they know.

Have you seen the CLUASDiscussion Board?