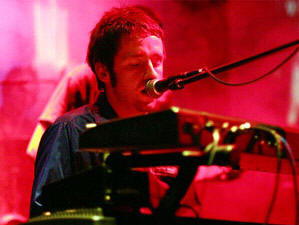 Review Snapshot:
The hotly tipped 66e celebrate the launch of their debut album at Whelan's. However, despite all the talk of how good this band is they ultimately flatter to deceive and this reviewer is left feeling distinctly underwhelmed.

Full review: Hmm, it seems that Gareth Maher's recent op-ed on the venue for this site hasn't scared me away and I'm back in Whelan's again, this time to see 66e launch their debut album "Fall Down Seven Times, Stand Up Eight".

They're a band that I've never had the opportunity to see or hear before but one that I've heard mentioned a lot when talking to people about local bands that are worth checking out. The phrase "a bit like Radiohead" has been uttered a few times during the course of these conversations so as a huge fan of Thom and the boys my interest has been more than piqued.

But before I get to see what the fuss is about there is the always risky game of Russian roulette that is the support acts.

Delorentos are a four piece guitar band featuring dual vocals and perform a set comprised of really well crafted alt-rock songs, as it turns out they'll be the best thing I'll see all night.

Dry County mix electric guitars with electronica and vaguelyMercury Rev-ish vocals. They're not bad, but they're not particularly good either, there's nothing wrong with what they're doing but listening to them just makes me realise how much I'm looking forward to seeing Autamata the following night.

With the support acts finished we get to the main event of the evening, the ear bending is done, it's time to see if the people I've talked to are full of crap or not, are the 66e worth the platitudes they've been getting? Seconds out, round one and they're off.

OK, first things first, the phrase "a bit like Radiohead" isn't entirely inappropriate. But it's a somewhat akin to saying that Shelbourne's Alan Byrne is a bit like Ronaldinho, they're kind of trying to do the same sort of thing and neither could be called bad, but one is doing it to an infinitely higher standard. 66e make pleasing sounding music and lift a lot of ideas from Oxford's finest circa OK Computer but what has always been at the heart of Radiohead's music is a keen sense of melody and the fact that Thom Yorke is a truly brilliant songwriter.

And quite frankly that's completely lacking here. You'll have to note that I said 66e make pleasing sounding music, and they do, but when it comes to creating songs out it they seem to lack structure. Their compositions are shapeless, they seem more concerned with sonic landscaping then thinking about the soil below that needs to be healthy in order for that landscape to blossom.

It's only when they play "I died in a movie" the title track from their debut E.P. which is sadly missing from the album that I'm seriously impressed. It sounds like something that Texas' wonderful Explosions In The Sky might come up with. The simple guitar riff that it's based around gives the piece a form that I find lacking in the rest of their set.

But what do I know? The venue is fairly packed and the band has the crowd eating out their hands, there is an occasion where the vocals are drowned out by the crowd singing along and numerous times when the crowd bays in delight for certain sections of music. Whatever it is that I don't see in the band, the audience's eyes are open to it and, god bless them, their opinion is more important than mine. I might not be back for more but it looks like they will.

The night can be summed up for me in 15 seconds that occurred at the end of the gig. The band finally left the stage for good following their encore and the sound man immediately stuck on "Planet Telex" by Radiohead, I think to myself that that might be what 66e are trying to do, but THAT is what it's supposed to sound like when it's done right.