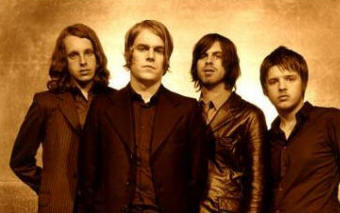 Review Snapshot:
The real thing or a bunch of Johnny-Come-Latelys? The 22-20s bring their blues rock dirges to Dublin, still living off the vapours of hype that brought them to everyones' attention. Have the former NME pin-ups missed the boat or have they got something up their sleeve?

Full review: Some eighteen months ago the 22-20s found themselves in the midst of a bidding war, despite their relative paucity of material. By the time they got around to releasing their debut album last September, their brand of swampy psychedelic blues rock was not the panacea it once seemed. Now with Franz Ferdinand leading the charge, art-rock is the music du jour, and the 22-20s pre-pubescent music career is in limbo. Red-hot before they even had an album, has the music industry's relentless pursuit of the zeitgeist relegated the 22-20s to yesterday's men?

Judging by the packed and expectant Whelan's crowd clearly the original hype surrounding the band has not entirely dissipated. How many of them would have swapped their tickets for the sold out Bloc Party show the following night is debatable, but an uneasy sense of 'After the Lord Mayor's ball' - or before in this case- is pervasive. Slightly disingenuous, perhaps, but comparisons are inevitable between two bands that have felt the full force of the media glare, the honour of Bright Young Things being wrested from the grip of the 22-20s over a year ago. Oscar Wilde's adage, "the only thing worse than being talked about is not being talked about" applies here.

Displaying a sartorial charm that belies their age - three members are barely in their twenties - the band arrives on stage in bespoke suits and quickly belt out some furious blues blandness. The slouchy insouciance of youth makes way for grade-A rock posturing. Lead singer Martin Trimble's cherubic features and biting vocals make an interesting combination and willowy bassist Glen Bartup's repeated spasmodic twitching is either the result of a severe case of St.Vitus Dance or an electronic taser to the behind. Keyboardist Charly Coombes practically fellates the ivories. They at least look the part.

Soon they begin to sound the part too. "22 Days" is a necessary and blinding diversion from the earnest but blustering blues-rock that went before, while the shamanistic "Shoot Your Gun" and voodoo gloom of "Why Don't You Do It For Me?" provide ample proof of the 22-20s charms. When not straight-jacketed within the narrow confines of the blues, the band offers glimpses of brilliance. Unfortunately the 22-20s are not overly blessed with tunes that offer instant gratification. Some are plodding and the frenzied rough-house blow-outs never quite reach a 'soil-your-trousers' style epiphany. A breathless encore and they're off.

For all their ability, the 22-20s still possess a 'wet-behind-the-ears' naivety. Lead man Trimble strikes an odd balance between diffidence and mateyness, and the staccato rhythm of the show makes it feel longer than its brief running time. But they are not a charmless bunch, and with a musical career barely out of short trousers, it would foolish to dismiss their obvious talents. Perhaps the period of gestation they were originally denied would help iron out their creases. They have time on their side.

Commendable support was provided by the luke-warmly tipped Nine Black Alps. Larruping about on stage displaying a level of dishevelment befitting a homeless Busted, these Mancunian ruffians bellowed out some surprisingly tuneful and sprightly guitar rock. Like Placebo but without the gayness.