Lead singer Danielle Harrison dives in with the skin on their return...

The young raven-haired woman sitting opposite me in the bar, her feet tucked under her slight body as she squirms to find comfort in the armchair, is Skindive's Danielle Harrison. And you would be forgiven for asking "Who?" 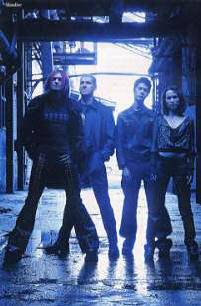 Two years ago Skindive, the only Irish alternative industrial rock outfit worth a damn, were poised on the brink of success. They boasted a blistering live show with deeply complex, layered songs full of incendiary guitars, tingling orchestral arrangements, and the powerful vocals of Los Angeles-born Danielle.

The release of their eponymous debut album should have sent them soaring - instead they crashed and very nearly burned. The last anyone heard of them was when they played Ozzfest; since then - nothing. One of the reasons for this was the flawed translation of the band's impressive live presence to the humble compact disc. All the songs were there, but some important je ne sais quoi was missing, some essential ingredient found only in sweltering, stinking, smoke-filled venues where guitars were lashed savagely and where the walls, the ground and your very blood rumbled with the cascading sound of Skindive. In contrast, the songs almost meekly seeping from your stereo speakers just couldn't hold a torch to the live versions.

Now it seems Skindive are crawling back from the brink of destruction, with significant casualties. They've switched record company and lost their bassist, Alan Lee, to Turn. In addition, their lead guitarist and the creative power behind the storm, Gerry Owens, has adopted a far less prominent role, instead focusing his attention on new projects and no longer actively touring with the band. Despite this, Skindive released a new single, Falling Down, on September 5th and a second album titled Precious will follow later in 2003.

"The thing with the record company was a long time coming," explains Danielle. "We'd signed with Chris Blackwell's Palm Pictures in New York, and we got on very well with Chris. But one by one it seemed all of the people who had been championing us left the company until we were left on our own. And with them in New York and us over here it was very difficult to keep things moving."

"So we made a decision and asked Palm Pictures to release us from our contract. Chris was very good about it. They could have kept us forever, but he agreed and that was that."

So Skindive eagerly wriggled free of a two-album contract, but found themselves lost and directionless. There was no record company to guide or promote them, and it suddenly seemed like they'd regressed to where they were two or three years previously.
"We were in limbo, we didn't know what we'd do," reflects Danielle. "I know that for me personally it was a very difficult time. I felt extremely low and I'm sure the others did too."

It was at this stage that the band suffered departures and near break-ups, but did Danielle ever consider giving up, even perhaps throwing in the towel completely and fleeing back to her family in the USA?

"No, never. After so much sacrifice, and so much effort and work, I was determined to see it through. I certainly wasn't ready to go back to the US; this is my home now, I've settled in nicely here over the past six years."

"Gerry was brilliant during that time after we left Palm; he was a fantastic source of strength. He just kept writing and writing and working on new songs, it was crazy. I was sure we'd eventually land on our feet."

And that, it seems, is what they've done, signing with new Irish independent record label AlphaMale Recordings. The new album, Danielle asserts, is a lot more accessible than the last. "It's not as heavy. There's still a lot of heavy rock stuff there, but there's much more variety with this record. On the whole it's lighter."

This, I suggest to her, will certainly help with radio airplay. In previous interviews Gerry Owens has gone on record saying he didn't approach the debut album with a view to releasing singles, and didn't really know what a single was. This tactic doubtlessly damaged Skindive's exposure - a main prerequisite for sales being the ability to get your songs on radio.

"Yeah, it'll help. The new single is already getting a lot of airplay, especially on shows like Pet Sounds, which is really great. But there will always be a problem for bands like us in Ireland because there are no alternative radio stations. The country's full of commercial chart stations all playing the same stuff. The only alternative shows available to promote bands like us are on late at night."

'Precious' is set to be an album of angry retort against the people who held the band back, with themes of "being let down, being pissed off, and sticking two fingers to people". It's indicative of the time in which it was written, and the emotions the band experienced during their various recent crises, says Danielle.

The American singer appears confidently at ease, and admits to feeling good about the record and expecting good things of it. Harrison, who describes herself as "raised on rock" and influenced by such diverse acts as Elliot Smith, Queens of the Stone Age and Metallica, sees a bright future for the new Skindive. "I can't wait to get out there and tour, so we can sell records which will allow us to tour again and keep touring!"