This article was first published
on CLUAS in November 2008

Record Labels: Out on a Limb

A profile of the Irish record label 'Out on a Limb'...

July 2008 saw Out on a Limb (OOAL) celebrate the fifth anniversary of their first ever release. To mark the occasion they will be having a 5th birthday party upstairs in Dolan’s, Limerick on Friday November 21. There is sure to be good music, cake and, according to a well placed source, maybe even some cheap plonk. Here, in the first of a series of features on record labels operating in Ireland, Steve O'Rourke sat down with Richard Bourke, one of Out on a Limb’s founding fathers, to discuss the past, the present and the future for one of Ireland’s leading independent labels.

What was the driving force for Out on a Limb when you decided to launch as a label back in 2003?
There was no real outlet/help for bands that we liked, to release their records, so we decided to put our money where our 'big' mouths were and started the label to release "Is it ok to be loud, Jesus?", the debut album from giveamanakick.

Who were the people behind OOAL at this stage and what did they bring to the table?
It was Albert Twomey and myself. We basically had a lot of energy and enthusiasm and not much else. We were both members of the AMC in Limerick (independent, DIY, music promoters) so we had experience in running shows and through meeting/talking to bands who played here from the US/everywhere else, we thought it was very achievable to setup a DIY record label and release music that needed to be heard.

What surprised you most/least about the record industry in the early days, and has anything changed?
Most: How easy it actually was to release a record yourself. You may not have had a distribution channel but if you were prepared to visit independent record shops around the country with CDs in hand, you could 'distribute' the CD yourself.

Least: People are idiots when it comes to music, ha! They would not recognise a band with talent if it bit them on the ass. Nothing has changed on that front really.

Was there a particular philosophy in place when it came to signing bands and has this changed over time?
How well the band performed live. The only real difference between then and now is what kind of personalities we want to deal with. We do this in our spare time and the last thing we want is to do is have to deal with an unreasonable personality causing us grief every which way we turn, life is too short.

What is your approach to releasing music/promoting your musicians?
Ciaran Ryan in the label deals with all the press really, the PR is done entirely in house. We have a multi-faceted approach to PR and it involves, in no particular order, the Internet and MySpace as well as group emails, live gigs, promo CDs sent to DJs and getting reviews published in print media, blogs, etc.

Of the bands currently signed to OOAL, can you give us more details about two or three of them (future releases/gigs etc)?

CRAYONSMITH
Crayonsmith's 2fm session went out recently on the Dan Hegarty show. They have recently had a couple of Irish shows, opening for Trans Am in Galway, and also their own headliner in Whelan's (Dublin) on Halloween night. Crayonsmith have some London shows coming up in November also, with full gig listings available on their MySpace page.

HOORAY FOR HUMANS
Safekeeping has just come out in the UK, thanks to the good burgers at Smalltown America records. It should be available in good record stores, and some rubbish ones too. Of course, it is still widely available in Ireland through 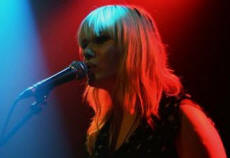 OOAL, and can be picked up online at their Myspace page and at Road Records. H4H also play this year's mega CMJ Fest in New York. Huzzah!

If there was one band/artist in the world you could choose to add to your roster, who would it be and why?
Personally it would have to be Nirvana. I just loved this band and they introduced me to alternative music, so in a way, if I had never heard of Nirvana, I would never have joined the AMC, met Albert or setup OOAL. Plus they would probably have made the label financially secure!!!!

You're celebrating 5 years in the game this year but what does the future hold for Out on a Limb?
Hopefully more quality releases!

What is the biggest challenge, record companies in general and OOAL in particular, face over the coming years and how do you plan on tackling it?
Piracy is pretty huge at the moment but, luckily enough, we have not really been affected by it. We always strived to have an excellent looking/sounding/cheap physical product that people would not mind spending their hard earned cash on. So if the overall product/package looks great, hopefully people will not resort to pirating it.