This article was first published on CLUAS in Aug 2003

Shane McDermott gets to challenge the sound barrier with Bell X1... 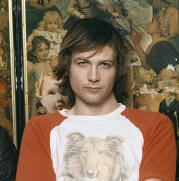 Irish indie rockers Bell X1 have recently released their second album - 'Music in Mouth' - to critical acclaim, with music journalists at home and abroad lining up to sing its praises. Certainly one of this year's best offerings, 'Music in Mouth' is an eclectic collection of tragedy and loss, love and joy. "We tried to make a joyful record, and no-one thinks it is," quipped front man Paul Noonan at a gig recently.

Taking a brief break from their UK tour, Bell X1 performed for a capacity crowd at HMV on Grafton Street last weekend (August 1st). Hundreds of appreciative fans crammed into the store, eager to see the band perform some of the best songs from the new album. Afterwards, I talked to Paul over a pint about the album, his wishes for the future, and - er - biscuits.

Shane McDermott: The album's name is taken from an Austin Clarke poem, The Planter's Daughter. Why did you choose it?
Paul Noonan: To me the album is a celebration of beauty, and I've always loved how beauty is described in that poem? "And they say that her beauty was music in mouth". Hmm?we haven't actually contacted the estate of Austin Clarke about the use of the line, maybe we should. I would hope that he'd like it.

How would you define the sound of the album?
This record, to me, is one of love songs in drag. They're songs of love and loss presented in a celebratory, joyous way. It sounds a bit contradictory but I think we knew when we were making it that it's a bit all over the shop. Some time in the future I'd love to make a very definite record with a definite sound, like a hip-hop record does, or a folk record. But I think we'd need to go off separately and do side projects for that sort of purity to appear.

How do you think it's different from your first album, Neither Am I, and how do you think the band has matured since then?
I think we're a lot less self conscious about things and we're just being more soulful and honest about it. We lived for three weeks as a band in a house in Wexford and wrote this album then. For me, that was the most enjoyable part of the whole process, because we were communicating to each other without actually having to say anything. We fell upon some sort of chemistry. We didn't have a lot of self-confidence when we were making Neither Am I.

One review said that had 'Music in Mouth' been a debut it would have been one of this year's best. Do you wish it was your debut?
No, not at all. You go through a process when you make a record, like a sort of purging. You make it and put yourself into it and it leaves its mark. In England it is our debut, but I hope that 'Neither Am I' will come out there at some stage. We're still very proud of it.

There have been a lot of comparisons to bands like Coldplay and even Radiohead. What do you think of this?
I think it's lazy. There's a quote from one review that says we're Radiohead as Radiohead should sound now, and that's just w*nk. I mean, who's to say what Radiohead should or should not sound like?

It's ironic that critics are saying things like Bell X1 have finally found their sound, when three of the songs on the album are years old. Why do 'Eve', 'the Apple of my Eye', fan-favourite 'Alphabet Soup' and current single 'Tongue' appear now and not on 'Neither Am I'?
Well, we'd never recorded 'Alphabet Soup', and I don't think we had done the other two justice in previous versions.

What about some of the newer material that fans thought would be on 'Music in Mouth', such as 'Real Palm Trees', '10 Paces' and 'Rockridge'? Will they make it onto a future record?
Yeah, maybe. I don't know. The chorus of 'Rockridge' has always bothered me. I think I've learned to be more honest when something is weak. If parts of it are beautiful or great and do something for you but there's just something?weak, then it's no longer good enough.

And do you know what the next single will be?
Yeah, it'll probably be 'Snakes and Snakes'. I don't really know what works or what doesn't as a single, I don't know what its purpose is. Those classic three minute pop singles - I don't really write those sorts of songs; I can't think in that way. Trying to break the mould of what will get played on radio is very difficult. I think there should be an agreement between artists that nobody should try to play ball and please the powers that be or the advertisers or whatever, and instead try to make songs that are just a bit more interesting.

So does that mean you were annoyed with having to edit 'Tongue' for radio play?
No, because that's not a song that I'm particularly precious about, to be honest. I think I'd be a lot more precious about other songs. I much prefer the live version and the album version, but I didn't mind so much as long as the edit didn't castrate the song, which I don't think it did.

What are your plans after the tour? Is a third album already on the horizon?
Well there's a lot of songs, but we're going to be touring for a year. I don't want to make another record yet, I don't think we're ready to do that. We're just hungry to get out and play, and sort of soak up the places that it brings us to. It's really exciting having the record out in places that we've never really been before. It's coming out in France, Belgium, Holland and Denmark, so we're going to be over there.

Are you conscious of trying to avoid 'The Frames syndrome', where they seem to have reached a certain level and stayed there, more or less, for the past 10 years?
I don't think that they have. It's really hard being self-sufficient, you know, making a record, going touring, and putting the record out in the States yourself - it costs a shit load of money. I find the whole Frames story very inspiring. It's truly a case of their fans?they're like crusaders in a way, you know? They're true patrons, they've funded the Frames' explorations and helped bring their music elsewhere, and that's just brilliant. I think Ireland is a place where people are acutely aware of that, and know how much of a part they play in the music. And Damien (Rice, former band-mate), who's done very well for himself, has experienced the same kind of thing.

Speaking of Damien, what do you think of his album, O?
I really like it. It was weird in a way, very emotional listening to it. He went through a lot and he felt like shit when he left the band, and left the country for a while. To come back and do what he's done is fantastic.

There are a few songs from your days together that you've both now done different versions of. Have there ever been any problems, legal or otherwise, concerning those songs and the rights to them?
No, it's a bit weird with all the different versions out there, listening to all the debates - which version people prefer and why, who wrote this, who has the rights to that. But there have never been any problems. We've always tried to keep it human. We've all been friends since we were thirteen, so while there were times when we never thought we'd go through the things that we did, like Damien leaving the band, we've kept it friendly and I would hope that we've never hardened towards each other. It is like any relationship break-up, and hurt and anger can manifest themselves in lashing out, and yeah I'm sure we've gone through a bit of that. We're in a position now though where everything is fine?but I'll be glad when the day comes when he isn't brought up in an interview. (Paul laughs suggestively)

Right. Moving along then?in 'Neither Am I' there were, arguably, a lot of lyrics which are possessed of a certain sexual innuendo (for example from the track 'Slowset', "What do you say/ when she's in your arms and you're going around in those circles/ yeah what do you say/ when both of you know you've risen to the occasion") while in 'Music in Mouth' half of the songs have biblical references. Have Bell X1 found religion?
No, I don't think we've found religion. But I don't think we've lost it either. My next-door neighbour was a Methodist minister, and when I was really young he bought me a big Bible Stories for Children book, and I've always loved them. I've always loved the whole idea of the Garden of Eden and that beautifully simplistic world view it had. And the fact that people actually take it literally I find hilarious.

Have you ever felt the album was going somewhere you didn't want because of pressure from the record label?
Not at all. We recorded and mixed a lot of it in their studios. All the suits were upstairs but they never actually showed their faces. They wanted to reinvent Island Records as the label within the Universal group that would let bands make the record they wanted. That's great because at the time of Neither Am I, I don't think we had the strength of character to do that. My flatmate Scott (Burnett) has done all the artwork for 'Music in Mouth' and its singles, and they were great about that. There was never this idea of forcing some London design agency onto us.

And Scott Burnett was responsible for the major overhaul of your website recently. What sort of feeling are you trying to convey with the new look?
Somewhere that's homely and inviting, where you can take off your shoes and sit back and relax with a really nice cup of tea. I think the other website was very cold. I want to bring more interactive elements to it as well, like the Kazoosical Bull competition (check out bellx1.com to find out more). I'd love to put in a games room or something, where people can go and play pong against each other.

With two albums under your belts and the band's fan base growing rapidly across Europe, do you think the success and fame has gone to anyone's head or are you all still fairly grounded?
One of the things that worry us sometimes is that we're not in the classic rock'n'roll mode as people; we don't seem to conform to whatever that is. That's worrying because in this fickle world it seems the more outrageous you are the more records you sell. When we tour in England we live in a proper working farmhouse just outside Oxford, and people find that really strange. They say things like, "Why aren't you in London throwing TVs out hotel windows?" We may give a TV a gentle nudge some day.

You have a degree from Trinity College. Do you have any back-up plans in the event that everything goes pear-shaped?
I have a degree in computer engineering and I still can't keep the f*cking website ticking over, so no, I don't think there's a future for me in that!

Finally, what's your favourite biscuit? (You'd be amazed at what gets discussed on Bell X1's website message board)
Hmm?I think I'd have to say chocolate hobnobs.

Check out the CLUAS.com review of the Bell X1 album 'Neither Am I'

Check out another CLUAS.com with Paul Noonan published back in 2001.