This article was first published on CLUAS in April 2002

An Interview with Josh Ritter

So there's more to Idaho than potatoes... 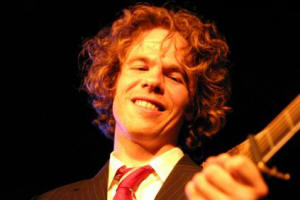 Josh Ritter sits up at his bare dressing room table in Whelan's. Half an hour before he takes the stage to his most enthusiastically received gig in Dublin he talks about his album, 'Golden Age of Radio', the lure of Ireland, the Rosetta Stone, Bob Dylan versus Bruce Springsteen, and why old-time folk music is still relevant.

It feels like I'm starting to develop my own identity. And people are enjoying it, loving it, and they're showing me a great time.

How do the audiences relate in Ireland, compared to the venues you've played in the States?

Whether you play with a band or solo, my favourite shows are the ones where [the audience] are giving a lot to me? The person comes to play, and for those minutes that they're up there it's like running a race, y'know. I used to be a swimmer, and used to be nervous before the race, but as soon as I was in the water I couldn't remember anything. That's the way I feel on stage, but that's also the way I want to feel when I'm watching the show - I want to cheer people on! And that's how it is here - that's how any good crowd is. They see you having a good time, and you want to give them a good time.

Within the scene you're in, the acoustic sounds, and going back to the folky coffeehouse culture, there's always been an element of rapport-building with the audience. As you get more successful, is this something you want to retain?

That's interesting. There's people I always think of when I look at that, the two extremes of that kind of music, as it gets bigger. First, I saw twenty thousand people in Kilkenny last summer just to see Bob Dylan smile - people want to see that guy have a good time, and when he's having a good time, everybody else is, but he's very deadpan and dry about it. And the other extreme is Bruce Springsteen, who still has a rapport with the audience - he's not talking to an individual or group of people who are in on the jokes or whatever.

So did you enjoy Dylan at Kilkenny?

It was an amazing show. What he has is just a gift.

There's always going to be comparisons between singer-songwriters like yourself and Bob Dylan. Is this something you feel you have to break from?

I think it's that, since Dylan, everyone with a guitar singing a song is gonna be compared to him. That's the way it is at the moment - it won't always be the case. I don't care, y'know. If people think I sound like Bob Dylan, and they like Bob Dylan, and they give me a chance, that's good. If they don't and they don't - that's fine. The best music fans are the ones who take it at what it is. But I do appreciate the comparisons.

Keeping within that folk feel, you started off listening to Peter, Paul and Mary - the original 'flowers in your hair' folkies.

Well, my parents had a few records, and when I was really little we'd go on long drives to see our grandparents and we'd always listen to two of them - the Oak Ridge Boys and Peter, Paul and Mary. So when I got round to doing this little tape recording in my room I sent it to Peter Yarrow - mostly because I didn't know anybody else. He was an amazing guy - he's got this little handlebar moustache and he lives in an apartment overlooking Central Park - he's made it - he probably lives with Woody Allen, or something.

So when you did pick up guitar eight years ago was it the epiphany you'd been waiting for? Was this suddenly the ticket?

Well I haven't gotten much better since! Seriously - I knew before I even picked up the guitar, as soon as I heard a song that put a thought in my head. I didn't know that I was gonna do it for a job, but it was love at first sight.

You started out in your hometown, Moscow, Idaho.

I was in my room for a few years, and then at schools, and then when I was in college.

So have the songs on 'Golden Age of Radio' been gestating for a period of eight years?

Well, no. The oldest of the current songs is about three years old. There's other ones I've stuffed somewhere, and I haven't listened to it for years. But I'm moving around a lot.

So how important is travelling?

It's really important - it's where I get my ideas, because there's something always changing in your life and it's interesting. I like being home so that I can sit and get it all out. At home I can sit down and record, and take a shower?

This time round you've performed a solo tour - how does it compare with playing with a full backing sound?

I like both, y'know. There's an energy you have at a band show that you can't create alone, and it works the other way around aswell. When you play solo it's almost like you're busking - you try to draw the crowd in.

On the new reissued 'Golden Age' you've reworked some tunes - 'Country Song' being one.

Well, we were jamming a lot, and that song is one that can be played a ton of different ways, and it just came out that way. It has a real feel that's perfect AM radio and that's what I was going for. We did it all with 1940s mikes and super-vintage equipment.

And what new records are you listening to at the moment?

Somebody named Jess Klein and the new Damien Gerardo record - that's an interestingalbum. I love the new Gillian Welch album "Time (The Revelator)", its one of the best records of the year.

What about the older stuff? The songwriters who've influenced you up to now?the 'sitting on the porch singing Townes Van Zandt' stuff?

His record 'Rear View Mirror' is incredible - I'll always have that. The other day I was in New York and a friend of mine played it and I just lost my heart to her.

What about some of Van Zandt's more mythic songs, like 'Silver Ships of Andilar', the stuff that wasn't straight folk or blues. There's echoes of that songwriting in a couple of your own songs like 'Potter's Wheel' or 'Bone of Song'.

For me those are songs I write when I think 'Man, there's enough love songs in the world right now - let's deal with something else'. So I had a dream where I saw the Rosetta Stone in a museum, except all that was written on it was songs. For a song like that or 'Potters Wheel' I believe in references that are less obvious, and maybe people get into it because of that. 'Bone of Song' came really fast, and I just knew what I wanted out of it. You can always a love song, but I'm interested in people seeing me as something besides that.

Are your new songs going to be in this vein then?

Well I'm just piling up a bunch of stuff. I want to make a good rock record. I also have songs that are slower and fit into a stranger area?

So how many chords do you know?

[Laughs] Not many. Enough to get by! I know just barely enough and when I find a new chord I write a new song so I don't forget it - that's the way to go.

And what was Ireland to you before you came over here first?

Basically my thoughts on Ireland were that it was the home of a lot of good music. I didn't now much about the current stuff, but the tradition is beyond compare. A lot of the music I was interested in and played in school, the Appalachian music, comes from Scotland and Ireland. Irish music was carried over there in the 1740s and is still being played. In South Carolina and Virginia and those places there's a deep well of music like that. Ireland was the originator for me.

What about the originators in recorded folk music, the likes of Woody Guthrie and Jimmie Rogers?

I've always listened to Woody Guthrie. He did a lot of songs and I probably have half of all he did and almost everything that anybody's ever covered - the likes of Cisco Houston and others. I visited places where he's been.

Do you think those songs are relevant anymore?

Well, if there was a way to make Woody's 'This Land is Your Land' the nation anthem I would do it. Songs like that ask questions - they say there's a lot of good things happening but there are always questions to be asked. Woody Guthrie leads that field.

In current affairs, has September 11th made any difference to you as a songwriter?

No. I think that people have enough to deal with and there's enough commenting on it. Everybody knows everybody's sad about it. You wouldn't ignore it ever. But it that's sacred - it's like why you wouldn't discuss religion. If other people want to that's ok, but I just choose not to.

And to change tack, how do you see yourself within the field of new alt-country, acoustic music? Compared to the likes of Ryan Adams?

[Lengthy pause] Ryan Adams' got talent - I definitely think he deserves the Grammy Award for hype. He had four records out even before his 'Bloodshot' record, and so he's been working really hard. I'd be thrilled to have the same deal, he's really lucky, but at the same time I would hope to be favourably compared.

Finally, how long do you see yourself doing this?

Until I drop. Maybe I'll drop sooner than I think, or just get tired. I nearly dropped yesterday?

Until you get that apartment on Central Park?

[Laughs] Yeah, that'd be nice. Maybe I'll do that sometime?