If you tell yourself a lie often enough you begin to believe it. I've heard this one big lie so many times. And still it hurts - "John Martyn's best album is 'Solid Air', it's Martyn at his purest and it has things like the title track, and 'May you never'". I cannot agree. I really never took to 'Solid Air', it's suffocatingly sparse. Light and shade never enter into the 'Solid Air' deal. Even its sleeve looks like a brochure for a funeral home. 'Solid Air' is simply too earnest - aside from the lightness shimmering through "Over the Hill" it's a laboured rather than lovable piece of work, and it's bleak on a gothic scale. 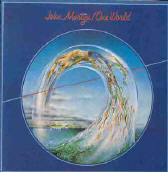 No, John Martyn's personal best is 1977's "One World", a dazzling set of sounds and feelings. It's an atypical Martyn album in that each of its tracks is fully formed and perfectly delivered - on his other works his ambition sometimes outstripped his muse but this never happens on "One World". This album is a ground breaker too - there's strands of lounge and it is decked out in dub sounds that rattle your rib cage. Listen hard enough beyond Martyn's vocals and you can even discern the first baby steps of trance. "One World" deals with the staple matter of many of the really great albums - love, sex and death - but above all "One World" is the greatest ad ever written for class "A" drugs. Just look at the pic of Big John on the inside sleeve - he's a man shrouded in a narcotic fug, and loving every minute of it. Each track on this albums sounds as if it was recorded deep within a bong and it is reflected in the album's moods, which sway from giddy to paranoid to jokey to stoned silent wonder at the world and its ways. Above all else "One World" is fun and playful and Martyn never sounded better, before or since.

"Dealer", the album's opener, is an aural recreation of the first joint you ever had - undertowed by an urgent rhythm track wafting up from the dark end of the street, Martyn's voice is twitchy and almost burnt hollow. It's all there, a verse that cries out, a raucous chorus a middle eight that shuffles and soars, topped off with a fade that snakes its way through your speakers. "One World " itself is a dreamy ballad, with all of its all roads leading back to Martyn's take on the Great Big Why. His voice is parched, the lyric almost childlike in its candour and the great Danny Thompson's bass purrs like a fat cat. Martyn's sense of wonder never sounded so good but he does Darkness too - "Smiling Stranger", with its treated vocals, semi-oriental string arrangements and shady sax, brilliantly predates Massive Attack's grandeur and menace.

"Big Muff" is "Dealer" from another perspective and it features the best rhythm track I've ever heard. The beats on U2's "Mysterious Ways" are in the same neighbourhood, but "Big Muff" has so much more - Martyn is by now singing from the back of his throat, he wigs out with some truly dazzling guitar lines over an arrangement as lithe as you'll ever hear, and the fade sounds as if it was conceived in blow heaven.

After all of these drugs it is love and lust that kicks in. Martyn gives us two totally different but complementary love songs: "Couldn't love you more" is a needy, almost desolate piece of work. When Martyn almost weeps that "If I lay all night in the rain for you / I could not / love you more" you know these words are written on his soul. He included a version of this track recorded with Eric Clapton on "Glorious Fools" in 1981 but the "One World" version of this ballad is the definitive one. It also gives a foretaste of One World's successor, "Grace and Danger", a total tearfest, which documented his marriage break up. "Sweet certain surprise" on the other hand is all hearts and flowers - "Silence has never been my thing / I want to know / I like to shout and sing about my love". It's a gloriously woozy piece of lounge blessed with a tipsy trumpet solo. "Dancin", a soft shoe shuffle, lightens the mood further, with its loose funk, shimmering guitar and keyboards.

To end it all Martyn sends us to our dreams with "After Hours", a long semi instrumental piece of 3am trance set over a simple shuffle beat and a shimmering guitar mantra. Martyn croons a couple of lines just to let us know he's there, and his guitar sweeps and soars. The darkest hour never sounded so good.

"One World"? One word. Peerless.