This article was first published
on CLUAS in January 2009 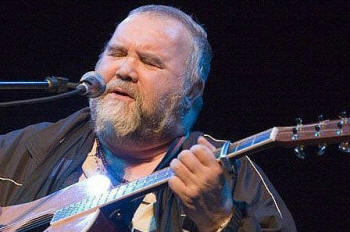 John Martyn has passed on. The king has died, long live the king. No shock, I was waiting for the call but beyond the journalistic clichés and the cut and paste obituaries there's still sadness and loss.

He dabbled in Buddhism and it's impossible not to see him as a grooved up reincarnation of Henry VIII. It's all there – the sprightly thin youth full of ideas, full of life, full of fun, the troubled middle period wherein he destroyed many of the things he loved, and sadly, the bloated and bitter later years where he became a sated mockery of his former self.

I saw him in Vicar Street four or five years ago and it was possibly the saddest two hours of my life. He had lost a leg, he was quite obviously sozzled and the band held his hands through the ordeal. I felt like I was paying my last respects. There were two moments though – he did a staggering version of "May you never", knocking the hell out of his acoustic, his voice and diction clear as crystal. In truth, I always thought "May you never" was a dog of a song, his "Whiter Shade of Pale", the grooves of this song had been worn well smooth. He made it sound like it had just been written. He finished with "Never let me go", a crooner's standard. Again, he sounded connected, he played the song and played with it too and you could see the glimpses of a former flame.

And now he's gone. Up to "Bless the weather" he was finding his feet, but from there on, through "Solid Air", the absolute heartbreak of "Grace and Danger" and the bite of "Glorious Fool" he produced an incomparable body of work. He basically bared his soul, irrespective of the personal cost to himself, and sadly, to those around him. He never made a decent selling single, not that this bothered him, and his albums are steady rather than voluminous sellers. He never took the soft option and it cost him, but his music would never have gripped us if he had.

John Martyn – as they used to say in the News of the World, all human life is there. He was a hero of mine but in his personal life he was deeply flawed. He sang about love but he was abusive to the ones who loved him. In a sense I loved him but I was glad I never met him. He took the hard road and I'm glad that he did.