Interview with Axel Willner of The Field

Anna catches up with The Field's main man... 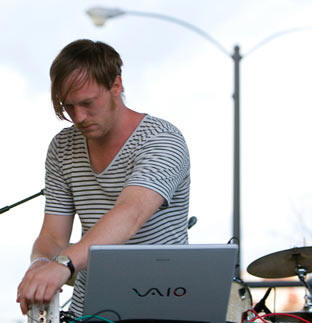 While fellow Swedes I'm From Barcelona and Suburban Kids with Biblical Names cut a path through the indie rock world, another Swedish musician is making waves in a different circuit. Axel Willner, aka The Field, is an electronic wizard, creating minimalist techno with a deep sense of musicality and an innate beauty.

Named after the 'field of music' from which he can draw ideas, music and samples, Axel's first love has always been electronica. A producer as well as musician, he knows his music, both past and present, and explains "I think it was probably from post-rock that I started listening to electronic and ambient music? mostly the early ambient I used to listen to: then Warp came along and more electronic kind of things, and it went from there."

The Field came into the public eye through From Here We Go Sublime, an album of finely wrought sample-based electronica, however he has more recently become known for The Sound of Light, a project commissioned by the Nordic Light Hotel in Sweden, although he's adamant that the resultant EP is a completely separate project to From Here? "I'd worked with them before, doing a commercial. Then they started with a new theory of making music unique to those things in hotel. It was a project for me, but I don't know if people think of it like that: a lot of people see it as a follow-up EP, which it's absolutely not, it's just music for that hotel. Just me."

As an electronic musician, systems and processes that work for other bands and artists have to be shaped and altered: although the writing methods of The Field are no less organic than more traditional ways, the basic materials differ. In his case, these basic materials are a laptop, sampler and other people's music. Axel hears and extracts the potential in all music he comes across: writing his music is rebuilding and reconstructing, rather than creating from nothing. "The process usually starts when I hear a track that I really like. I try to reconstruct it in my head and I try to recreate then what's in my head. That's usually how it goes, with a track I like or one I have special memories about. I sample the things I want to sample with it, rearrange it, and rebuild it into something new."

As for how this might work live, he claims the processes are much the same, but done in real time, and thus the 'live' aspect is never lost. "I sometimes work with other live musicians, but right now, and just recently, it's just me. A sampler, a laptop, and some other effects - a pretty unique show, probably, or hopefully anyway!"

The Field is not Axel's only moniker, though it has been his most successful so far, taking him across the world to new audiences: "The hardest place to play to is actually Sweden, and Stockholm my hometown in particular: it's just a really tough crowd. The States is tough as well as they're so used to the whole rock thing, with wide legs and thrashing guitars. The UK and Germany not as much though, they really pay attention, and I love playing there. I'm looking forward to the Dublin gig."