This article was first published on CLUAS in June 2008

Interview with Damon and Naomi

Niamh Madden catches up with the reincarnation of Galaxie 500... 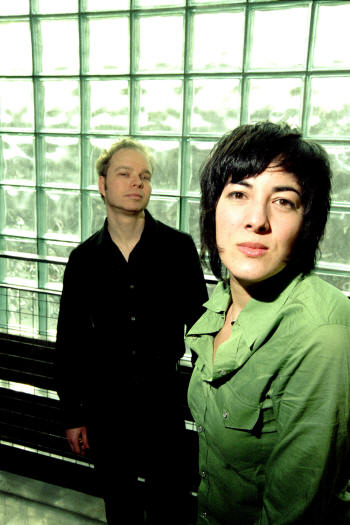 In a review of your album 'Within These Walls' (2007), Byron Coley and Thurston Moore dubbed the album a masterpiece. Do you think that twenty years experience as musicians together has ultimately brought about your best piece of work?

In many ways it's hard to judge your own work, but I do know that it's not a record we could have made before -- musically, or emotionally. Musically, we've learned a lot in recent years, from our own development but also from working with Bhob Rainey (soprano sax) and Michio Kurihara (electric guitar) -- both are very skilled players, and in Bhob's case, conservatory trained. Working on our material with them has pushed us to complicate it in certain ways. They enjoy the odder harmonies or chords we sometimes come up with intuitively, and that has I suppose encouraged us to come up with more of them. Emotionally, it's a really dark album of songs. The topics explored in the lyrics are not really "young person's" ones -- I suppose that means it's even less rock and roll at this point!

You and Naomi seem to be constantly on the go. Is it challenging to juggle lives as musicians, publishers, artists, and running an indie label?

The only challenge is how to pay the bills. But almost all artists face that, I think. We enjoy the things we do, which is how we found ourselves in this odd situation. It's a bit like a story that a drummer I like, Jeremy from Hawk and a Hacksaw, told me -- he plays a kit that he constructed out of odds and ends, in order to better suit his music. He plays the accordion at the same time, so to free his hands he has a a stick taped to one knee, and another sewn into a hat. One day, he caught a glimpse of himself in the mirror, while playing, and he thought: who is this madman? How did he ever come up with this? But taking it one step at a time, each decision made sense.

How do you think that introducing Michio Kurihara several years ago to your duo has influenced the sound of Damon and Naomi?

As I mentioned, Kurihara is a great musician, so working with him has influenced us in that way. But I would say the most important influence has been based on friendship -- I think with a true friend, the relationship influences you.

After so many years playing together, do performances ever have glitches or is being onstage almost like breathing?

It's a funny idea that there would be no glitches! We have a habit of changing things around for nearly every tour -- changing the repetoire, the instrumentation, the arrangements ... We need to keep things current, for ourselves, to have the songs make the most emotional sense. The casualty is often a glitch-free show! In Ireland, we'll be performing as a duo, something we've become interested in doing again, after a number of years of expanding our group.

Your song "Turn of the Century" from "Playback Singers" was used on an episode of The Sopranos in Season 1. How did you get involved?

I have to confess, we live without a TV, and had no idea what the show was. Our music publishers told us it was on cable, and we thought, oh well, no one will watch that... Later we saw it advertised on the side of a bus, and realized that we probably misjudged the reach of the show.

I liked your fun facts on the Damon and Naomi website. You mentioned that 'Careers' was a popular childhood game. Did the two of you realise early on that you wanted to combine all your skills to do the numerous projects you're doing now?

We've been following our noses, for better and worse -- the last thing we expected was to have a music career, really. But music itself has always been central to us, and we've always wanted to make the things central to us part of our daily lives, so there you go. Now if I can just remind remind myself of that on the drive between Louisville and Chicago tomorrow!