This article was first published on CLUAS in October 2009

"Cork Rock – From Rory Gallagher To The Sultans Of Ping"

A review of the Mark McAvoy's book on the Cork music scene... 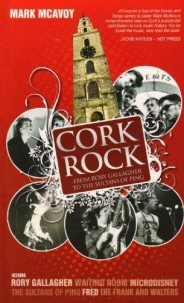 There are two songs that I remember from my teenage years that evoke a kind of carefree, youthful abandon. Both songs signified our last hurrahs before the grim reality of adulthood. One was ‘Smells Like Teen Spirit’ by Nirvana. The other? ‘Where’s Me Jumper?’ by The Sultans Of Ping. These two disparate pieces of music, both rock songs yet polar opposites to each other, could bring people together on the teenage -disco dance floor like no other – ‘Teen Spirit’ was angry and cathartic while ‘Where’s Me Jumper?’ was playful and silly. It resonated with the teenagers who were jumping around to it because of those very qualities. It was song about losing your jumper at a disco - possibly a nice, well-fitting jumper that the girl you fancied spotted you in and you desperately wanted back. It was about the nothing and the everything, life-affirming yet throwaway. When I was out jumping around to it as kid, it meant everything, in the same way ‘Teen Spirit’ did. The genius of ‘Where’s Me Jumper?’ lay in its exuberant and childish simplicity. Like ‘Teen Spirit’ it still sounds amazing today.

How this song came about and the coming together of the band that created it is recalled in Cork-based music journalist (and Cluas contributor) Mark McAvoy’s superb new book on the secret history of the Cork music scene: ‘Cork Rock – From Rory Gallagher To The Sultans Of Ping’ (Mercier Press). With a generous amount of first-person quotes from some of the main players (Donal Gallagher, brother and manager of Rory, Cathal Coughlan, the Sultans’ Niall O’Flaherty) McAvoy traces the music scene of his hometown from the showband era of the sixties right up to the present day and in doing so makes a good argument that probably the most memorable and idiosyncratic bands to come out of this small country in the last few decades originated from the banks of the Lee.

There are the bands and musicians that are familiar to many: legendary guitarist Rory Gallagher, who jumped aboard the showband wagon to further his own musical aims; the great Cathal Coughlan of Microdisney and Fatima Mansions and of course the Sultans and the Franks but my favourite passages in the book are when McAvoy reappraises bands that may have slipped under the radar or who existed only briefly on the margins of the Irish or UK music scene. Nun Attax, fronted by Belfast blow-in Finbarr Donnelly, whom McAvoy describes as having, a ‘rather menacing appearance and a confrontational yet humorous persona’ were probably this country’s first significant punk rock band and would prove to be a considerable influence on a young Cathal Coughlan. After splitting up but reforming with some new members under the unusual moniker of Five Go Down To The Sea? (question-mark is intentional, don’t ask), they moved to London and eventually received recognition by the NME. Sadly, Donnelly died in a tragic, if somewhat bizarre, accident in a lake at London’s Hyde Park. Another intriguing band from this period were Stump. Also fronted by a compelling vocalist in the gangly shape of Mick Lynch, Stump garnered some significant success in the UK, appearing on the iconic UK music show The Tube and making the cover of Melody Maker (a BIG thing in those days). To see this weirdly fascinating and probably unique band for yourself, check out the truly extraordinary ‘Charlton Heston’ on YouTube. Stump’s absurdist approach to music would serve as a template for better-known bands that would follow in their wake, namely the Sultans of Ping and the Frank and Walters.

‘Cork Rock’ reminds us just how successful the Franks were in the UK in the early nineties. After moving to London, the weekly music indies Melody Maker and the NME took to the band in a major way, giving their EPs rave reviews which led to appearances on Top of the Pops and The Word and sell-out tours where they were supported by PJ Harvey and Radiohead. Yes, Radiohead. It’s heartening to note that the band is still a going concern all these years later. The Sultans also broke through in the UK around the same time. It seemed that British indie-kids wanted something ‘refreshingly light-hearted’ as McAvoy describes it, as an antidote to the angst-ridden grunge scene and two bands from Ireland’s real capital were providing it in spades. The book also discloses the truth about the location of Sultans front man Niall O’Flaherty’s beloved jumper (how could it not?). The word in Cork was that it was lost at a hip indie-music club called Gigantic but, as O’Flaherty gamely admits, the truth is little more prosaic. In fact, the jumper was misplaced at what seems to be a rather cheesy disco called Spiders. So now you know.

The book neatly concludes with an overview of the Cork scene in recent years. Apart form Fred, it seems the quirky tag associated with Cork music has faded in this decade. Bands like Cyclefly and Rubyhorse would embrace metal and mainstream rock respectively, both acts achieving some considerable if short-lived international success before going their separate ways. Simple Kid and the criminally underrated Stanley Super 800 are also bands that developed their own identity while still retaining that singular, indefinable quality that makes Cork music so fascinating. One band that rejected the quirky tag outright was the now sadly defunct act Waiting Room, whose inventive and mainly instrumental album ‘Catering For Headphones’ received very positive notices when it was released in 2004. Dave Ahern, a member of the aforementioned band, designed the eye-catching cover for this insightful and well-written book.