Anna hooks up with a Lad in Red... 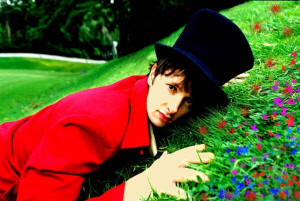 Recently invited by JJ72 to support them on their Irish tour, Chuzzle is beginning to make a name for himself. CLUAS.com's Anna Murray manages to chisel a few answers from a name you can expect to hear a bit more of in the future.

So, the beginning. When did you first start playing music?
When I was about seven. I started piano lessons, but then for Christmas a year later somebody gave me a guitar. So I said "feck the piano!" and that was that. Soon afterwards someone gave me a Beatles songbook and that was when I really got going. I'd spend hours learning songs and chords from the book.

When did you start writing songs?
When I was eight years old, actually. My first song was an almost exact copy of an Elvis movie number, with lyrics you'd kind of expect from an eight-year-old karaoke Elvis: you know the kind of thing, "I sure love you, honey, you sure love me, uhuh uhuh?" Deep stuff.

Wow, eight is pretty young. My next question was going to be if your writing style has changed much since then?
Well, it's matured a bit (I hope!). It comes back to that Beatles songbook, really. I'd spend ages looking at the construction of songs, learning what chords work well with others, and so on. I became addicted to songwriting pretty quickly. But of course that's only the first step. Skipping forward a few years, my first gigs as Chuzzle gave me some valuable lessons in what has to happen to turn a good song into a great song that actually gets a crowd going. Live shows teach you how to send that bolt of electricity through a song. That's what makes U2 great, for instance.

Other than supporting JJ72 on this tour, have you toured much across the country since you began, or have you stayed mainly around Dublin?
No, this tour is the first time we've played outside Dublin (apart from the M? Festival last summer). I started playing with the band just over a year ago. The conscious plan was to just gig around Dublin, tighten up the live show, get the Chuzzle name out there a little bit before taking it to the next level. As for the JJ72 tour, Mark Greaney happened to see one of our shows at Whelan's and asked us to support them. They're a brilliant band. It was great to hear their new material - talk about fire in the belly! And what a joy to meet new audiences in Cork, Waterford, Limerick, Galway, Castlebar and Belfast. People were so responsive!

For this tour, your band was down to just you and two others. Did that make it more difficult? Did you enjoy a more stripped-down show?
Well, there's the 3-piece 'bonsai' live show and then there's the real-deal 5-piece with full drums, bass, guitars and keys. Obviously you need the full band for the authentic Chuzzle wall-of-sound experience, but it made sense for the JJ72 support slot not to clutter the stage too much so we went with the stripped-down show for those dates.

Does your band contribute to the songwriting process?
The songs are all my own, I'm a solo artist. But it was clear to me from the start that a team of first-rate musicians would be essential to recreate and expand the Chuzzle sound on stage. And I'm blessed to have those guys on board.

If you could have one band or artist play your music, who would it be?
Paul McCartney. He did an experimental thing a while back with the Super Furry Animals called the "Liverpool Sound Collage", and it blew my mind. In my book, he's the greatest living artist. Do you have his number?

I saw on your website you worked with Marc Carolan on your new single "The Secrets Have A Life All Of Their Own". What was it like working with someone who has worked with groups like The Thrills, JJ72 and even Muse?
Fantastic. Marc is a gifted producer as well as an exceptional live-sound man (he does Muse's live shows around the world). And his two hats make him unusually adept at capturing the energy of a live performance on disc. I couldn't ask for anyone better. I mean I've always had a fear of producers who'll close you down and try to process you into their own sound, but Marc's really open to listening to what you truly want to do. He has an uncanny ear for new ideas and sounds, which is exactly what I was looking for. I mean, just look at the bands you mentioned: they're all bands I really respect because they can rock out while making melodic music as well. That's pretty rare.

You yourself have been hailed across the board as the only original among Ireland's plethora of singer-songwriters. What do you think marks you as different?
Well for one thing the fact that I don't think of myself as a 'singer-songwriter' in the usual sense of the term. I'm not into this idea that Solo-Artist necessarily equals Singer-Songwriter. Are Beck & Bj?k & Marilyn Manson singer-songwriters??? In terms of genre, the Chuzzle sound is much, much closer to rock than folk, Bowie than Dylan, Radiohead than David Gray. If people come to a Chuzzle show expecting another guy with a guitar, they're in for a shock. As for the word 'original', I do have a strong belief that you shouldn't ask people to come to your shows or buy your records if you've nothing original to offer. Become a photocopier-maintenance engineer instead! That's why I admire people like Miriam Ingram and Duke Special so much - their music is fresh.

Either way, you have definitely a very unique style, in every way. Do you find some audiences less receptive to that than others?
I do sometimes get some funny looks when I come on stage wearing the red coat and top hat. It's a bit of a theatrical costume, and there are risks that I'll be seen as almost a novelty act. But most people get into it if they just count to ten and wait for the music to start before making any assumptions. Once Matt's drums start pounding, the costume kind of clicks.

Is it entirely a stage persona, or are you naturally that quirky?
It's an alter ego. I'd often wear the coat and hat to parties and always when singing in the studio. I imagine it's the same buzz that actors and drag artists get - you know, you get to bring out a different side of yourself that in some ways is more real than your everyday self. A concert should have a sense of occasion about it. The stage is such a magical space. I feel like a conjuring act sometimes, but instead of pulling rabbits out of hats, I'm pulling tunes out of guitars (it's less cruel!).

You've evidently been writing and gigging quite a while then, do you not think you waited a long time to go into the studio?
Well, to be honest, this time last year I was dying to get into the studio and get something on record, but thankfully my wise manager said no, you're not ready yet, you're too young and inexperienced, give it another year. I wanted to punch him! But it turned out he was right: I couldn't have done it a year ago, I needed to hone my craft live. You learn an awful, awful lot on stage.

How did you find the transition from a responsive live environment to a sterile studio one?
Good question! It is of course much more clinical in a studio: you're standing in front of a microphone, almost too afraid to move while everybody's waiting for you! You know, "OK if I cough or are we recording?", that kind of thing? But we had a great crew on board, which really makes a difference. And no better man than Marc Carolan to create a relaxed & spontaneous atmosphere. After all, the studio can be an incredibly creative space if used properly - look at the controlled anarchy of the Sgt. Pepper sessions, for example!

What about the future? Can we expect more in the way of releases from you?
For defo. We were so thrilled with "Secrets" that we went back into the studio and recorded two more numbers with Marc. It's agony having to pick one song as the d?ut single! It'll be coming to your friendly neighbourhood record shop in the next month or so. People can check out www.chuzzle.com for updates.

The music industry is very success-driven. What would your idea of success in music be?
Success? Two things. First, to give myself and the guys in the band an amazing career on the road. We've absolutely no interest in Best-Kept-Secret status. And second: in 20 years' time to be able to look back at a collection of really well-recorded, quality albums that have stood the test of time, songs that have had an impact on the culture somehow. It goes back, again, to that Beatles songbook I was given age eight. I want a 'songbook' of my own.