This article was first published on CLUAS in July 2005

Ciar? gets to have a few words with the Canadian hip-hop artist... 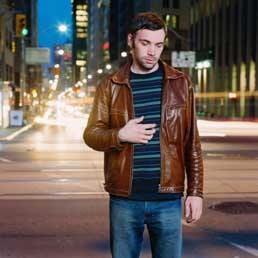 "I do indeed consider myself an outsider and I guess I like it that way." You generally don't expect interviewees to be so forthright, but in the case of Buck 65, it's to be expected. After all, he is the guy who on "Leftfielder" told us "you never heard it like this before".

Buck 65, aka Rich Terfry, certainly stands out from others in the hip-hop world, if you could say he even fits in there to start with. Rich grew up in rural Nova Scotia, Canada before moving to Halifax in the late eighties where through his involvement in college radio, he became involved in local hip-hop circles releasing his own material under a number of aliases, most notably Stinkin' Rich. However, it's under his current guise that Rich has come to most attention at this side of the Atlantic, particularly his two most recent albums (both released on Warners), "Square" (2002) and "Talkin' Honkey Blues" (2003). Operating as pretty much a one-man band handling vocals, production and some turntable duties; it's perhaps Terfry's unique vocal style, constantly compared to Tom Waits and Johnny Cash, and incredible lyricism that have garnered the most attention. The lyrics punch a mighty dart of black humour that leaves you wondering whether you should be believing it all.

Buck's new album is out at the end of July, something that he is understandably excited about. "I'm psyched. My new songs are gonna make you barf - in a good way!" The LP will mark something of a departure, with Chicagoan post-rock legends Tortoise taking up on much of the recording side. Following on from his work on the DJ Signify LP "Sleep No More", it seems Buck 65 is becoming less of a musical loner, despite his own concerns. "Collaborating makes me nervous and uncomfortable, but I feel it's a good exercise", he explains. On the subject of "Sleep No More", Buck's tracks all seemed linked, almost conceptual; something which has been said of much of his work particularly the albums "Vertex" and "Square" (consisting of 4 tracks each split into four more tracks, titled "Square 1, Square 2, etc). It's not a tag Terfry is completely at ease with: "I like the frame-work of an album more than single songs. I guess that makes me sort of conceptual. I try not to have too many habits though. My new album is very unconceptual. I don't like that word, 'conceptual'. I think it scares people" .

It mustn't have come as surprise to many that Buck 65 recently played the Vincent Gallo-curated All Tomorrow's Festival. To many, they would be seen as kindred spirits. "Vincent is a friend of mine going back 5 or 6 years now. If he hadn't invited me he knows I would have beaten him up. Vincent is the best guy in the world, no matter what anyone says. I love him. It was great playing ATP. The line up was unbelievable. I never feel cool, but I felt cool being a part of that". Gallo, along with the likes of Guy Maddin, Floria Sigismondi and Harmony Korine, would all be favourites of Rich's to direct a music video for him, but he tells me that "David Lynch would be an obvious choice for me, but that would never happen in a million years".

Buck 65 has made a number of appearances in Ireland, including a performance in the New Band tent at last summer's Oxegen, which was the highlight of the weekend for many. He appeared to be looking forward to coming back in June 2005 for his most extensive tour to date including a dates in Limerick and Dublin: "I've had really good experiences in Dublin and really bad experiences in Cork. But I have a friend in Cork who's a great chef who always makes food for me when I visit. I have roots in Ireland, so I love to come there. I can't wait to check out Limerick. I hope to have some free time there this time".

Buck 65 was interviewed by Ciaran Ryan

Check out the CLUAS review of Buck 65's EP 'Square'