This article was first published on CLUAS in August 2004

Gareth links up with Brendan during a recent Irish tour... 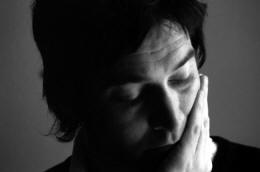 It was Tuesday afternoon, peak time for traffic. The weather seemed indifferent, threatening to rain and shine at the same time. A bizarre character wearing a Santa suit paced back and forth at the Kevin Street junction. Inside Whelan's, a confused looking gentleman was struggling with a crossword while the bartender flirted with two girls sitting on high stools at the bar. In came Killarney born singer/songwriter Brendan O'Shea, looking a little nervous. Just as the interview was about to begin, his mobile went off. It was Mark Geary wishing him luck for the show that he was due to play in Whelan's that evening. With the mobile off, nerves settling and the bartender running out of chat-up lines, the interview began.

Gareth Maher: You played in Dingle two nights ago. Did you get a chance to go home?

A lot of Irish artists like Mark Geary & Damien Dempsey have taken the same route as you of establishing themselves on the New York scene. What's the attraction?

Good question [short pause]. I know Mark and Damien both very well. I think we come from a generation, really that weren't going to America for work. We were going to America to see what we had talent-wise over there. Speaking for myself, I feel you have a little less to lose as you don't know anybody and there are millions of people. While at home you are a little slower to step up because there is such a high standard in Ireland with everyone knowing each other. There are so many different nationalities living in New York, some of which might like your songs and they could be your audience. I think that America has things to offer that Ireland doesn't.

Do you find any differences between American and Irish audiences?

I appreciate - as most songwriters and artists do - audiences wherever I play in the world. Whoever is paying their money in to see what I have to offer, I really appreciate that. American people are a lot more reserved. They are a little more spoilt for choice for music on a nightly basis. If I were going to a gig, there would be about four gigs I could choose from. As for Irish audiences, they go to a gig because they want to be there. Irish people are not reserved when comes to promoting their happiness and I love that.

What is the big hope for this current Irish tour?

This is my first Irish solo tour. The hope is that I don't fall flat on my face. I want to do the gigs, perform as good as I can and get satisfaction out of doing that. With two gigs done so far, I'm already blown away that people showed up. And again I have to give Ireland credit for the music and the arts, as the word on the street is really strong. The hope for this tour is to get through it and enjoy it.

You are plugging your debut album 'In The Light', are you trying to relaunch this album?

Not really. 'In The Light', which is my debut record, came out February 2003 - 'came out' in the sense that I took them out of my case and made them available to buy at gigs. I didn't really have a release for the record. It was just a case of playing a few shows and telling people that I have a record. I'm going into the studio in January to record a new album and I still have a fair amount of copies of 'In The Light'.

What about your newer material? Is there a mix of old and new songs in your set?

You know something, since having only done one record I just have these songs, which I wrote just before I recorded them. But I'm feeling really positive about the new songs. I've basically written a whole album of songs, which is a learning process in itself.

Are there any standout tracks, personal favourites?

Personally when I perform, I always get a kick out of singing 'Still' and 'Dismantled'. Different songs have a different ownership each night. In Dingle I played twelve or thirteen songs but in Limerick last night I only played about six of those. I'm not a fan of having one setlist for one tour. I usually go off the vibe of the audience and on how I'm feeling.

When you played support to Mark Geary in the Temple Bar Music Centre last year, Mark came out and sang a song with you. Are there plans for other artists to appear on the new album?

There's a good chance if I can afford or blackmail him [laughs]. I would be honoured to have him sing maybe on a song that we co-wrote. I think a lot of me managing and promoting myself means that I can do an album whenever I choose because nobody really has investment in my record but me.

Do you have a release date in mind?

Emm no. I'm going back to New York at the end of September. I'm actually touring on some dates for Mark's new album 'Ghosts'. Then it's Japan in November, I got a bunch of gigs out there. And then, knock on wood, into the studio in January. Maybe a late summer release in Ireland next year.

When writing, what is the hardest element to capture?

It doesn't flow out when I write. The songs that I do like seem to capture the essence and the truth. I was on the radio in Kerry a few days ago and the same question was asked about how do I write songs. I'm not the type of person who would see something and instantly put pen to paper. Songs for me come more out of feelings than visual aspects of life. The one's I feel confident about are the one's that slip out onto the page rather than the one's that I really have to work on.

Now that you are living in America, do you try to stray away from writing about American politics?

I don't but I've never felt that I was a political writer. I'm an avid follower of politics in Europe and America, as I like to know who is in charge. But I never felt that my stuff is politically orientated. Then again I never try to stray away from writing anything.

Could you explain your association with the Trinity Irish Dance Company?

I'm glad you brought that up. It is an American Irish Dance Company based in Chicago and is run by a guy named Mark Howard. I lived in Chicago for two and a half years playing in a Celtic rock band. You must keep in mind that this was all pre-Riverdance. Then Mark asked us to play music for his dancers and we actually went to Johnny Carson. He would be the American Gay Byrne. In 1991, we actually played on the Johnny Carson show. Being an Irishman living in America seeing this happen, it could've went either way, paddywackery or genuine. I've travelled all over the world with the dance company playing for kings and queens.

Some of your songs have appeared on the soundtrack to 'Backdraft' and 'The Great Tomato Singer/ Songwriter Collection'. How did you get involved with those projects?

The Backdraft thing came about when I was playing in a band called The Drovers. This guy came up to us after a gig one night and explained he was a producer for Ron Howard. I didn't even know who Ron Howard was at the time and now I know he's a famous director. But the guy told us that he was making a movie about Irish fire fighters and they wanted an Irish band in a
scene. So I wrote two songs, which are in the movie. Great experience. The Tomato Singer/Songwriter Collection came about due to? No one has ever asked about that before. About a year ago, the day I mastered 'In The Light' I was offered a record deal. These guys from Tomato Records, Townes Van Zandt's record label, invited me up to the Chelsea Hotel. I decided to not take the deal though. But I kept going up there because it is like a dream sitting in the Chelsea Hotel, in the room that Bob Dylan used to own. They asked me if I would record two songs for a singer/songwriter collection CD even though I wasn't accepting their deal. So one night, I went into a studio and I got to work with John Parish, who has played with Chuck Berry and PJ Harvey. We recorded two songs and it's available in all good record shops.

Do you feel slightly out of place beside such distinguished artists as Johnny Cash, Townes Van Zandt, Nina Simone and Hank Williams (who also appear on 'The Great Tomato Singer/ Songwriter Collection')?

It's an honour. But of course I feel out of place. I still often pick up the album and say 'wow'. To me, Nina Simone is the greatest female singer. God rest your soul. Her voice was so amazing. And who isn't a fan of Johnny Cash?

Haven't you played with Elliott Smith?

Yes I did. It was about four years ago in New York. I came in and he was sound checking and I said 'Howya'. I'd love to have a story where I sat down and had a cigarette with him but it didn't happen. That kind of Jeff Buckley status is starting to hang over him. Death brings fortune to some and misfortune to others.

With so many singer/songwriters around, what do you think makes you different?

Ah, good question. Number one I'm from Kerry. Even if you've never picked up a guitar you're different [laughs]. Honestly, I don't look for any difference. That answer usually comes from the public rather than the songwriter. I've something different to say and a different way of saying it. I come from Kerry, Mundy comes from Offaly, Damien comes from Dublin, and we all grew up in Ireland but with a very different societal impact.

What would be a realistic ambition for this year?

Honestly, to finish my own little tour, to do Mark's tour. Also, I'd like to be able to call up venues like Whelan's and not cringe at the thought of them hanging up. Realistically, I just want to get the word out there that I'm around and develop a bit of a fan base. Maybe get a distribution deal in Ireland and a manager, because I'm doing it all on my own.

Brendan's debut album 'In The Light' is on sale in Road Records or at www.cdbaby.com