Review of their compilation album 'Prisoners of Love' 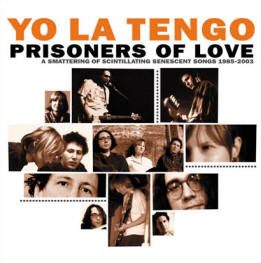 Full review: Yo La Tengo have been quietly plying their trade for over twenty years now and this two-disc collection (sub titled "A Smattering of Scintillating Senescent Songs 1985-2003") marks their first compilation of their back catalogue. Prisoners of Love is being pushed as an 'introduction' to the music of Yo La Tengo rather than an all-out 'best of'. Its just as well, given the glaring absence of such Yo La Tengo gems as 'Today is the Day', 'Deeper into Movies', and 'Dan Electro 3', to name but a few.

Yo La Tengo are a hit-and-miss band. A sizeable bit of this compilation is monotonous, going-through-the-motions 3-minute crap-rock (see "The Story of Jazz"). However, when Yo La Tengo click, you know you're listening to something special. It is no co-incidence that most of the standout tracks on this compilation feature drummer Georgia Hubley on lead vocals. Her voice is Yo La Tengo's greatest attribute, however for the most part her singing duties play a secondary role to those of her band mate & husband Ira Kaplan, much in the same way that the truly haunting voice of Low's own drummer-cum-vocalist Mimi Parker is seldom deployed. Songs such as 'Little Eyes', 'Swing for Life', 'Pablo and Andrea' are given a distinct atmosphere of their own by Hubley's husky, minimal voice. Especially 'Pablo and Andrea', a song lifted by resonating Hawaiian guitars and sliding fretwork. The band rock out on 'I Heard You Looking' and 'Blue Line Swinger', both slow-building instrumental crescendos of distorted guitar work. 'Autumn Sweater' - probably one of Yo La Tengo's best-known songs - has a great drum groove and it surprisingly rocks with the unusual sound of a church-organ!

Yo La Tengo are the type of band that makes you appreciate great songs. Great songs are a rarity and when they come along, you have to get every last drop out of them. Yo La Tengo are not a band of great albums, in the way a band they are constantly compared to, The Velvet Underground, were. Likewise, Prisoners of Love is not a great album. However, this is not a shameful indictment on Yo La Tengo, because they are a band of great songs, and Prisoners of Love is an album with great songs on it. At least half this 26-track collection is genius. Plus you will be hard pushed to find an album with as many quality tunes on it for the reduced price Prisoners of Love is going for!