A review of their debut album 'Fever To Tell' 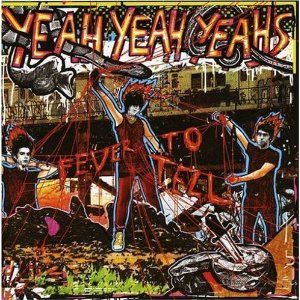 I should have known. When the Evening Standard article on this up and coming New York (cool) band concentrated more on the lead singer's dress sense than the music, alarm bells should have been clanging away. Fashion frustrates me anyway - I can never grasp it. Fashion is slippery as an eel.

"Exuberant", "angular", "radical"... words fawning critics used to describe this cacophony of screeching guitar, yelping vocals and scattered drums. Undoubtedly this album will make it into many Best of the Year lists. How in all fiefdom can this be possible? I've rarely had a less pleasurable listening experience - my ears literally bled. I stared at the cover. Did I pick up the demo version? Will it grow on me? Like cancer, it will.

No no no. Do not believe the hype. This record is bobbins. Is there any reason why a single-word chorus has to be squealed over and over like Karen O has just sat on a chair with a strategically placed drawing pin? Repeatedly. Song after song. 'Pin', 'Rich', 'Tick'. Even the White Stripes realised that the "no bass guitar" thing was a dead duck - they opened their latest album with the best bass riff of the year. Without the warmth of a bass, this album sounds like you are playing it through the tinniest speakers with the treble turned all the way up to 11.

Hype can be worthwhile. It must be earned though. Not slavishly applied to a cool look... Interestingly the only worthwhile tunes are toward the end of the album where Karen lets herself slide into a more moody, romantic persona. And is instantly more appealing.

Ultimately, though, this CD is singularly rubbish, over-worshipped and a placemat in the making. It made me -  briefly - fall out with music. A crime that can never be forgiven.

Check the CLUAS review of the Yeah Yeah Yeahs live in Limerick in April 2002.