A review of their album 'Suspended By Stars' 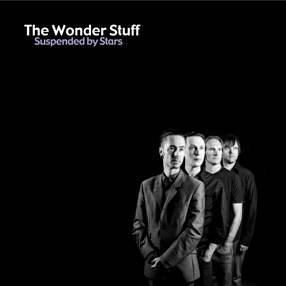 Review Snapshot:
New release by Walsall's finest. Miles and the Stuffies fail to inspire though with this unimaginative and somewhat lethargic attempt at a comeback. Trading on past glories and nothing to offer the kids of the 21st century.

Full Review:
Ah I remember The Wonderstuff! It was the early nineties when kids with undercuts roamed the earth in t-shirts with "ja" on the front and (wait for it,its worth it I promise you....) "mes" on the back (brilliant).

They were known as "The Eight Legged Groove Machine", and their brand of snarling indie, fiddle infused pop resulted in four solid, and sometimes inspired studio albums. They also built up a reputation as one of the better live bands doing the rounds at that time. And all this culminated with a number 1 single, "Dizzy" featuring Vic Reeves, and a farewell concert headlining the 1995 Phoenix Festival, to over 80,000 fans.

And then they were gone. Off into the inevitable obscurity of questioanble solo projects and even more questionable VJ gigs,(frontman Miles Hunt barely managed to complete the 120 Minutes MTV had signed him up for).

However now it seems the boys have deemed that this dull musical climate we live in is ripe for their return. Time to shake things up a bit. Alright well let's have a listen, maybe the world needs a touch more in the way of fun music.

The album starts brightly enough, "Tricks Of The Trade" instantly reminds you of what a vibrant vocalist Miles Hunt was and seemingly still is. Its even complete with a bullhorn rant, reminiscant of "Let's Be Other People".

However it starts to drift quite dramatically towards MOR stadium rock after that. "We Hold Each Other Up" seems to drag on forever, without really getting anywhere.A fate suffered by several songs on the album. "Last Second Of The Minute" makes you wish it was the last second of the song, and "Someone Tell Me What To Think" is an instantly forgettable journey through a bland ineffectual musical landscape.

Even when the band attempt to get back to what they're actually good at, they seem to falter. "Blah Blah Lah Di Dah" has a good ridiculous song title which leads you to believe your in for some lighthearted fun with an acerbic undercurrent, but again the music lets them down. Theres nothing resembeling a hook that might hold your attention or who knows maybe even hum it to yourself at a later date.

Occasionally you get to experience a cutting witty lyric, as in "Angelica Maybe" - "He liked to talk to her about babies, she responded by saying that one day she'd like to own her own bar" - but they're all too few and far between and the aforementioned song drags on for over seven minutes! Self indulgence really seems to be the order of the day here, "The Sun Goes Down On Manor Road" starts with the line "This wasnt no party, it's how we used to live" which really smacks of men in their late thirties aching for the days of groupies and champagne lunches with record execs.

Miles Hint signed off their Phoenix appearance with a play on the old Johnny Rotten phrase. He bellowed into the microphone, "Ever Get The Feeling You've Been Treated???"

Sadly this time, no.