A review of their album 'Catering For Headphones'

Being hailed as the one of next big things from Cork, Waiting Room have produced a curious endeavour with "Catering For Headphones", a gentle set of songs that hang off of various riffs, many of which use a background cello to amplify their effect. Sounds good in theory, but the writing of the album definitely ranks it as one of the more peculiar homegrown releases in recent times. 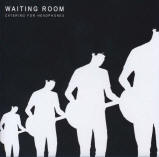 The opener "Waller Street" has a pleasant intro with a soothing guitar riff and effective cello sound; that is until an ill-advised voiceover from Charles Manson pretty much soils the music. How very odd. It quickly moves onto "I Took Some Painkillers" which is actually an instrumental, though you wouldn't think it when the track begins. Instrumentals are often very good in their musical intention, but unfortunately this sounds more like it was meant to be a song, so you end up waiting for lyrics that never arrive. Not only that, but it abruptly stops in mid-beat, almost as if someone pushed the stop button for no apparent reason. Another oddity. Lyrics finally appear in the dreamy "Another Take" albeit very briefly (possibly too briefly for that matter) and an effective cello sound forms a strong backbone to the song but otherwise, the song's potential is not maximised.

There's a touch of Boa Morte plus decibels in "Message Received", a quiet ballad that is turned up to good effect midway before it slows down again for its outro. Finally it feels like the record is beginning to make progress. It does with the moody "Amsterdam" which is certainly a highlight with pragmatic lyrics against the backdrop of a ringing guitar riff and a multi-voiced chorus makes the song all the more enjoyable. "Return My Rabbits" is possibly the best track on offer with relatively simple but delicious plucking of guitar strings combined with longing, heartfelt lyrics.

A throbbing bass line provides good foundation for "Point Your Eyes Down" and its ongoing crossovers of silence and noise addictively gel together, even though at this point the best of the album has come and gone. "Angel" and "Today Left Me With" are pleasantly melodious in a folksy sort of way, and then to finish, it's back to another instrumental "Carousel", which once again, would probably sound better with some lyrical intrusion. In fairness though, it's always difficult to find truly unique instrumentals and credit to them for trying.

All in all, "Catering For Headphones" is a laboured listen and its opening tracks make it difficult to keep the listener interested. While a few central tracks are undeniably unique, much of the record feels like a collection of good ideas with poor execution. But after all, it is a debut so at least there's room for improvement next time.

'Catering for Headphones' is released on Out on a Limb records