A review of his album 'Pay the Devil' 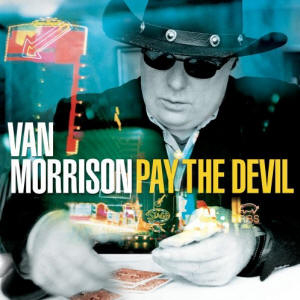 Review Snapshot:
Jules Jackson pulls his Stetson down over his eyes as Van the Man unleashes his full fat cheese version of Country 'n' Irish on an unsuspecting world.

Full Review:
In the late 1960s Bob Dylan strolled into Nashville and began what has become an august tradition among succeeding generations of pop and rock stars: making bad country records. Over the years, many have joined him in this uniquely strange and pleasurable musical pastime with varying degrees of success. Elvis Costello hit a home run with a deliciously appalling version of the George Jones hit, 'A Good Year For The Roses' and then ruined it all with the sublime 'King of America'. Matt Johnson of The The looked set to mangle Hank William's back catalogue in 1994 but failed completely by turning in the brilliant and magisterial 'Hanky Panky' instead. The Chieftains tried their hand on no less than four occasions but their innate musicianship and respect for tradition kept getting in the way and they found themselves turning in fine versions of standards like 'Long Black Veil', 'Goodnight Irene', 'Cotton Eyed Joe', and 'Tennessee Stud'. Darn!

No, making a bad country record is not as easy as it sounds. What it needs is someone with an ego of unique size, a self image at odds with reality as it exists and a set of musical skills utterly unsuited to the genre. Enter George Ivan 'Mozart Ripped Me Off' Morrison, who has succeeded in making a country record so enjoyably dreadful that it deserves a special place in the selection of piped music playing in the toilets of the Hazel Hotel, Monasterevin. From first cut to last, this is a bad record of the first water; apart from Van's own trademark wailing, mewling, bawling yelp which manages to make even the most simple and prosaic lyric unintelligible, 'Pay The Devil' offers up band arrangements so cheesy that they would make TR Dallas cringe in embarrassment. I have never heard so much bad pedal steel guitar this side of Donegal town. Don't get me wrong, I loved this record but, Jesus help me, when Van is not strangling classic ballads such as Rodney Crowell's 'Till I Gain Control Again' or Hank Williams' 'Your Cheatin' Heart' at birth, he is having a go at penning twaddle such as 'This Has Got To Stop' (yes it has Van, right now), a song that is identical to every other song that Van has ever written.

What was he thinking? How did this come about? Did Van and the boys pull in for a late night kebab in Tubbercurry and, whilst their chips were frying, start to pay very close attention to the Big Tom track being played on the greasy old FM radio positioned beside the grill? Does Van have some secret desire to duet with Margo? Does he feel that being a Celtic mystic was perhaps a bad move? Does he regret that he never made V neck sweaters a key part of his image? What, in the name of Daniel O'Donnell, compelled him to record and release a record that has more to do with the myriad chicken 'n' chips circuit acts that ply their trade every week in the back pages of The Sunday World than it does with the Harry Smith Anthology of American folk Music?

Make no mistake about it folks, 'Pay The Devil' is nothing less than Van's attempt to write himself into the annals of Country 'n' Irish music. He even appears on the cover wearing the sort of cowboy hat you can pick up in Jesters costume shop for a fiver. At some level, Van must harbour a sneaking desire to get in on the action presently enjoyed by such acts as Southern Highway, Texas Gun, Barroom Buddies and Dakota, all Norn Iron by birth and rhinestone by nature. Either that or he covets a place on the celebrity version of the BBC N.I show 'Country Cool', should it ever get made. Best bad record of 2006? Oh yes.