A review of their album 'Three's Co.' 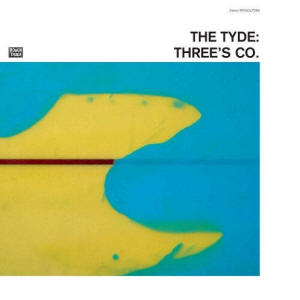 Review Snapshot:
A sadly insignificant affair, The Tyde's third album, imaginatively titled 'Three's Co.' does little to raise the heartbeat of Cluas writer Dromed, in fact it is all she can do to stay awake long enough to piece a review together.

Full Review:
The Tyde's third offering 'Three's Co.' opens with a fairly inoffensive and insipid track, 'Do It Again' and sets the tone for much of the rest of the album. It has a touch of the Boo Radleys about it, but none of the same spark or eccentricity. There are some mild harmonies and summer-loving strumming that try hard to appease the listener, but it fails to capture this listener's imagination . 'Brock Landers' is accompanied by some uninspired backing vocals from one Conor Deasy of the Thrills. These are so difficult to make out that one wonders why they bothered with them at all. Was it to add some credibility? Pull the other one.

Things start to pick up somewhat with 'Separate Cars' with Darren Rademaker's vocals finally sounding a little more interesting. However, while it's a gently rolling, introspective shoe-gazer of a tune, it still amounts to substandard Mercury Rev. Lyrics such as "Let's go out this evening. We'll take separate cars" feel a touch too throw away for me and it's all a little unconvincing.

Some seriously naff synth motifs murder 'Too Many Kims' (yes I know naff isn't a real word, but I'm using it anyway because it's apt) and 'The Lamest Shows' makes me want to hurt myself to see if I'm still awake.

When The Tyde turn things a little more sour the sound is far more enticing. 'Glass Bottom Lights' is what you'd imagine Echo and the Bunny would sound like after consuming one too many E numbers and 'Ltd Appeal' has a warm near-cinematic quality to it. But these are brief respites in a sea of mediocrity.

'Country Line' is a desperate Status Quo impersonation and 'Aloha Breeze' poorly attempts Hawaiian Country music. Even some pretty decent lap steel playing cannot disguise the sheer banality of this song. The album ends as irrelevantly as it begins and fades away without leaving a mark.

Clearly not all albums need to make bold, brash statements, nor be seminal, life changing pieces of work, but surely it should move you or at the very least register some kind of a reaction other than apathy? If these are not your requirements then this album may just suit you; to cut your grass to, to wash your car to, to decorate your coffee table with?well, you get the point.