A review of the album 'Blowback' 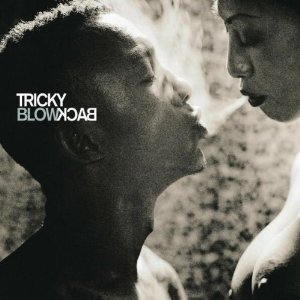 Just as artists before him, Bristol's Tricky switched his tune and turned to a more mainstream sound. This new album is not a dark and ominous trip-hop experience as we heard on his album 'Maxinquaye', or even 'Angels With Dirty Faces'. In fact, it's very melodic and colourful.

This is his testimonial album about survival and change ( hence, the album title: 'Blowback'). Just before he decided to record the album, Tricky came down with a rare illness which resulted in the deterioration of his immune system and psychological state. This disease was triggered by certain foods he would eat. After being put on a strict diet and watchful eye, he's recovered and his life is back. This album tells that story.

Tricky called on some of his favorite recording artists to help him with 'Blowback'. And what we get is a wide variety of contemporary pop songs. From atmospheric reggae supplied by Hawkman ('Diss Never', 'Bury the Evidence') to the snappy guitar-driven rock of the Red Hot Chili Peppers as they do a rendition of the theme tune to 'Wonder Woman'.

Tricky mainly does background vocals on most of the album. Although on the first track; 'Excess', he sings lead vocals. On the fifth track; 'You Don't Want', vocalist, Ambersunshower sings over some great 80s synth sounds. Others contributing are Cyndi Lauper, Alanis Morissette and Ed Kowalczyk of Live.

Blowback won't make my top ten list for sure. It bothers me that Tricky has purposely geared himself to be a pop-icon and MTV / VH1 regular. I miss the sinister dark depth of his thoughts and songs. The old Tricky was never something Top-40 radio would embrace. However, with his new album they will happily accept and that's just what he wanted.