A review of her album 'Scarlet's Walk' 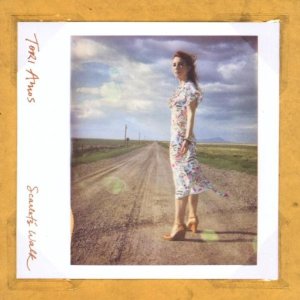 Ah Tori. Not exactly the easiest artist to deal with. Over her career she has produced a mix of some of the most beautiful, interesting, snarling songs you are ever likely to hear. Unfortunately with this brilliance, she also has a habit of churning out tedious, confusing and vexing songs.

Emerging in the early nineties, she was quickly put on a pedestal as one of the most interesting female artists around. Unfortunately the past few years have not been too kind to her (or rather she has not been too kind on the record buying public).

1999 saw the release of "To Venus and Back". It lacked the scope and infectious nature of her previous work. Then came "Strange Little Girls" in which Tori covered 12 well-known songs. Listening to these covers will ruin the originals forever. Quite frankly it is unspeakably horrendous.

And so when I received my copy of "Scarlet's Walk", I was a little sceptical. What is immediately apparent is the intricate detail, which has gone into the production. Every layer, every cymbal crash and piercing shrill is crystal clear. Sonically, it is a joy to listen to.

Opening with the pleasant 'Amber Waves' which utilises background harmonising to tremendous effect, it is followed by the single 'A Sorta Fairytale'. Immediately catchy it is a hark back to her early career when melody was the most important factor.

One thing that does stand out is the use of guitars. On past releases this instrument was barely used and when it was, it was kept to the background. This time the guitar is used frequently and in a bolder way. This is not to say the piano is made redundant. Rather it has just had to move over a little to make room for the gentle buzzing, rolling guitars.

Lyrically this album sees Tori delve into a new source of material. Rather than her usual starkly personal and often self-deprecating lyrics, this CD is - shock horror - a 'concept' album. Lets face it; concept albums are notoriously bad and usually made by people with strange haircuts who have a fetish for guitar feedback. Fear not, this album has nothing in common with its 70s counterparts. Its subject is a troubled confused girl named Scarlet, who travels across America before finally settling down both in mind and home, when she gives birth to a daughter. One could easily draw comparisons to Tori's own life, as motherhood is rumoured to have given her a sense of calm and a new focus in her life.

Another new feature on this album is the introduction of longer songs. And - get this - they actually work. Previously, save a few exceptions, her attempts at creating something over the 4 minute 30-second mark have yielded rather dull results. 'Gold Dust' and in particular the seven minute 'I Can't See New York' make up for past errors, as every second is vital to the song and demands the listener's attention.

But, being a Tori Amos album, along with the beauty and the genius, there is the irritating and the bland. 'Pancake' and 'Mrs. Jesus' just don't cut it and were needless additions to this album. But therein lies the problem. This album is 18 tracks long! Very few albums can sustain quality and interest over so many songs. I am a member of the old school that believes an album should be listened to from start to finish without any interruptions. It's just too overbearing here and too much too take in at once. If three or four of the more mediocre tracks were harvested, then perhaps it would be a more enjoyable relaxing experience. As it is now, it is just too long and failed to hold my attention for the whole album. Which is very sad, for there are some outstanding tracks on this album, but mediocrity strikes a little too often.

Although this is her seventh studio album, it still gives me the impression that Tori is only starting off and still has so much more to give. She is the sort of artist who has the integrity to survive and be un-phased by current music trends while still acknowledging and taking an interest in society and its views. She has the talent to one day create a real timeless classic. This could have been it. I just wish someone had of told her that size isn't important. Quality is.